There are a number of older ships still running in Canada despite all the predictions about their ultimate demise-but timwe is quickly running out for most of them.

The ferry Holiday Island sailed late this afternoon from Halifax Shipyard after a refit which included a sparkling new paint job. The ship is scheduled to be re-engined, which shows considerable faith by the Minister of Transport (her owner) that she has a good many years lefty in her. Built in 1971 she has certainly reached a respectable age.

1. Holiday Island at noon time today, ready to be floated out at 1600 hrs. Sharp eyes will detect HMCS Preserver in the background. Of similar vintage it is on the replacement list to be built by Seaspan as part of the NSPS.

Speaking of ferries the Trans St-Laurent reached her 50th anniversary this summer, without fanfare. Her owners Clarke Inc, a mere shadow of the former Clarke Shipping,  is down to just this one ship in Canadian waters (and one other, the container RoRo Shamrock in the Caribbean). With only about three years left on her charter to Société des Traversiers de Québec we should enjoy her while we can. 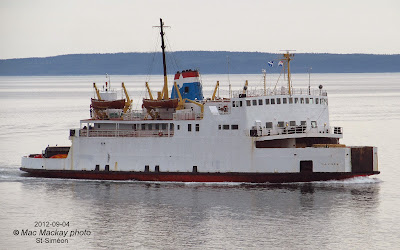 2. Purpose built in 1963 for the Rivière-du-Loup to St-Siméon run, the ship is still going strong (it has never been anywhere near Halifax..)

Back to Halifax the wonderful CCGS Hudson sailed this afternoon on another scientific mission. Her days are numbered, because a replacement is part of the NSPS contract awarded to Seaspan in Vancouver. The new ship is still a few years away.
3. After a short evolution in Bedford Basin, CCGS Hudson enters the Narrows bound for sea at noon time today. Her replacement will not have the dramatic shear and graceful lines of this ship.

Not so lucky is the laker Algoma Québecois. Built in 1963 by Canadian Vickers in Montreal as Québecois the ship sailed for original owners Eastern Lake Cariiers (Papachristidis) until 1972, then Upper Lakes Shipping until 2011 when she was acquired and renamed by Algoma. The ship was laid up at the end of the 2012 season and since June has been sitting in Toronto, where I was able to grab a quick shot of her last week. 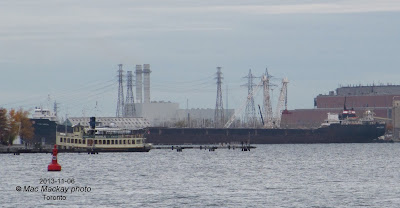 4. Idle on the Toronto waterfront November 6 Québecois awaited her fate.

As early as tomorrow tugs will arrive to tow her to the scrappers in Port Colborne.

5. In 1995 she was still Québecois and was passing Quebec City when I took this photo.

The ship has the sad distinction of being the second last operating cargo steamship in Canada. Her sister and fleet mate, which is not expected to sail beyond this season, Algoma Montréalais ex Montréalais is, for now the only (and will be last) steamer* in operation.  Were it not for the excellent construction of these ships and the care with which they were maintained - not to mention a great deal of time in fresh water- they would have been gone long ago. However their virtually indestructible steam turbine propulsion systems have kept them running when disels have supplanted steam almost everywhere in the world.

6. This may be last season for Algoma Montréalis and the for the last commercial steamship operation in Canada.
Built to traditional laker design, with wheelhouse forward and maximum Seaway dimensions of the time, the sisters have outlasted several newer ships. To give another sense of their longevity, they were built with escrow credits, reserved from the sale of wartime built Victory ships. As a form of subsidy to Canadian shipyards, owners were allowed to sell the Victory ships to foreign owners, but the proceeds had to be used to finance construction of new ships in Canada. The canny shipowner owner, P.B.Papachrisitidis parlayed credits from a few war-built ships into a Great Lakes fleet, that was then sold to finance an international fleet, which is now Hellespont Shipping. He did not skimp however, these were among the finest lakers (and best looking) ever built.

[* One exception to the demise of steam, is the Toronto ferry Trillium. With steam reciprocating machinery, the 103 year old paddle wheeler is an incredible example of steam at its finest, however its operation could not be considered commercial in the same way as a a cargo ship.]
[Other exceptions include the steam tug Master in British Columbia, the excursion steamer Segwun in Muskoka, and a handful of non-operational preserved steamships such as CSS Acadia HMCS Sackville in Halifax and the passenger ships Keewatin and Norisle on the Great Lakes.]
[None of these are cargo ships, so we are truly seeing the end of an era..]