Lots of Harbour - Dearth of Ships

With the re-arrangement of shipping schedules amongst the G-6 Alliance, there are fewer, but larger ships. There area also no ships on Sunday anymore at either Fairview Cove or Halterm. The cruise season is over for the year. Gypsum is flowing at a trickle.
No crude tankers, and fewer coastal tankers, things are not looking rosy.
Red sky at 0700 this morning: 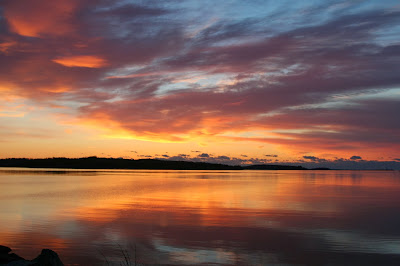 Sailors take warning.
It is not just me that misses the ships. The Atlantic Pilotage Authority has been forced to raise its fees to cover costs, due to a drop off in the number of ships.
The bunkering tanker Algoma Dartmouth moved over to Imperial Oil yesterday and back again, but has not fueled a ship in weeks - maybe not since the refinery closed. One wonders how long will Algoma will be able to keep it here fully crewed with no business.