IT Intrepid - fuels up at Imperial

Lending credence to rumours of the demise of ship to ship bunkering in Halifax, the cable ship IT Interceptor sailed over to Imperial Oil this morning, fueled up and sailed back to Pier 9 this afternoon (via Bedford Basin to turn). The ship is in port to transfer cable at pier 9, but imagine how much more convenient it would have been to take fuel right at the berth, without moving, and having to pay for pilotage, etc., The ship uses diesel fuel, so that is apparently still available at Imperial Oil. 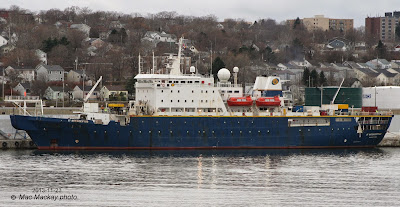 Originally I thought that Imperial Oil had merely stopped producing bunker C and that lighter marine fuels would still be available for Algoma Dartmouth to deliver. Now it seems that only diesel will be available from Imperial, and no heavy oils or marine fuels will be stored.
Therefore there is nothing for Algoma Dartmouth to deliver and she will likely be removed from service after making a last delivery to Oceanex Sanderling this weekend. ( Bunker C and heavy marine fuels are considered to be "black" or "dirty" oil, and need to be heated to flow properly - diesel is considered to be "clean", is light and is not heated. Tankers require different equipment to handle clean products, and Algoma Dartmouth was built as a bunkering tanker for "dirty" products only.)

This is a major blow to Halifax's status as a full service port. If a ship comes in now for fuel, it must tie up at Imperial Oil to get diesel, or tie up at a pier and have the other grades of fuel trucked in from Saint John or Quebec. That can't be cheap compared to tanker delivery. It is also well nigh impossible for a cruise ship to fuel from trucks while embarking and disembarking passengers over the same pier, so that business will be lost.

Visiting naval vessels often received fuel while in port, and that business will be gone - I can't imagine a dozen tanker trucks lined up along their piers to fuel a ship. Similarly container ships will not be able to fuel while they are working cargo - the cranes will be in the way- not to mention the chaos that would be created with fuel trucks on the pier.

Then there is the matter of fueling naval, Coast Guard and government ships - I wonder where they will get their fuel (those that don't burn diesel.)

With the decline in use of Bunker C fuel for ships, it is only a matter of time until it is banned completely, as it is now in the coastal US. Other marine fuels will still be needed, but they won't be available here by bunkering tanker.  Algoma Dartmouth's days are numbered.

It is sad to see another reduction in service to the port, just when it is poised to take advantage of some new developments, such as the opening of the new Panama Canal. As first/last North American stop, one of the advantages of Halifax was that it was also a ready source of fuel, that could be taken while a ship was at anchor. The provincial government even removed some tax from the product to encourage ships to come here just to take bunkers.