The Canadian Forest Navigation Group ship Tufty made a quick turnaround in Halifax to take on a part load of grain or wood pellets at pier 28. It arrived late on Thursday, loaded all day today and into this evening, and is sailing at about 0100 hrs in the morning. sailed at 0700 Saturday morning. 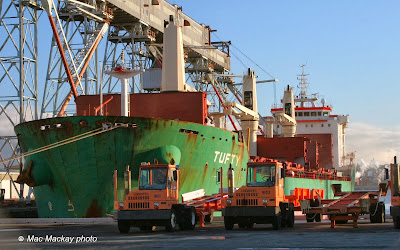 Canfornav is one of Canada's largest shipping companies, without actually having any ships under the Canadian flag. Specializing in trade to the St.Lawrence River and Great Lakes, its forty ship fleet is mostly registered in Cyprus, and on long term charter agreements with Greek owners.
Tufty's last port of call was Hamilton, ON, November 19-22 where it loaded (probably soy beans) and returned down the Seaway on November 23-24. Prior to that it had been up the Saguenay River, to discharge cargo. Its destination now is Ghent, Belgium.
The ship was built in 2009 by Shanhaiguan Shipbuilding in Qinhuangdong, China. It is fitted with three 30 tonne cranes and has hydraulic folding hatch covers.It measures 19,814 gross tons, 30,803 deadweight tonnes.
All Canfornav's ships are named after breeds of ducks - (many not indigenous to Canada) - and are geared bulk carriers of the handy size. Their top notch web site gives particulars of each ship, stowage plans, etc.,
See: http://www.canfornav.com/en/about-us.aspx