No postings for the earlier part of the week, due to an unusual absence from Halifax. I had two days of meetings in Toronto, which certainly cut into my Halifax ship watching, but never one to miss an opportunity, I did manage to get in two ferry trips - one to and one from the Billy Bishop Airport (YTZ).
The ferry Marilyn Bell I was the ship, and the total time aboard was about 5 minutes each way!


Surely one of the shortest ferry routes in the world at 121 meters, the trip is necessary, because the small airport is on an island in Toronto Harbour, cut off from the mainland by a shipping channel. The only means of reaching the island is by use of this ferry. It carries passengers and vehicles, including fuel trucks and all other supplies for the airport. 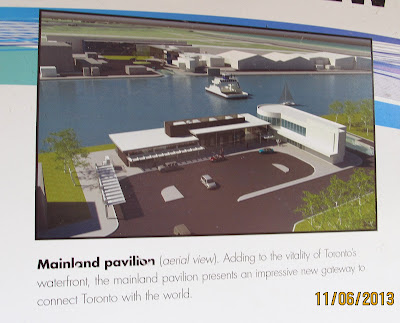 The ferry Marilyn Bell I was built by Hike Metal Products in Wheatley, ON in 2009 as TCCA 2 and took its present name in 2010 to commemorate the first person to swim across Lake Ontario, a feat she accomplished in 1954: http://en.wikipedia.org/wiki/Marilyn_Bell
A similar craft, David Hornell VC is the back-up boat. From the same builders, it dates from 2005 and is the former TCCA 1 . When it was renamed in 2010 it did not have the "VC" as part of its name, but that was soon corrected. Flt. Lt. Hornell was an RCAF pilot in World War II: http://en.wikipedia.org/wiki/David_Ernest_Hornell 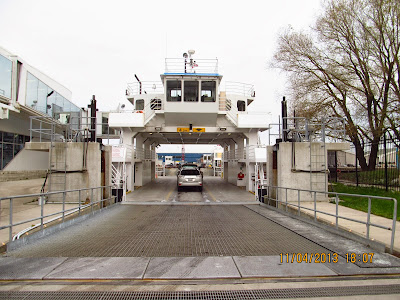 Lots of room aboard for cars and trucks including this Seaboard Harmac B-train, carrying aviation fuel, adding a bit of a nautical touch. (Seaboard was founded by Nova Scotian Joe Shannon, and is now a coast to coast trucking operation under many banners: http://seaboardtransportgroup.com/) 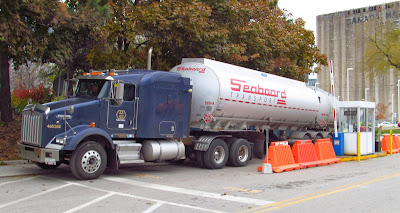