The PEI ferry Holiday Island is taking time off from its busy Caribou, NS - Wood Island, PE run for a refit at Halifax Shipyard. It arrived in Halifax October 28, and entered the Novadock floating drydock, where it has been high and dry ever since. It is now in the midst of a hull repainting. 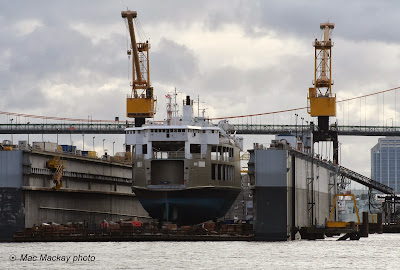 Since built in 1971 by Port Weller Dry Dock, the boat has provided sterling service- first on the Borden-Tormentine run for Marine Atlantic and since 1997 on its current route under the management of Northumberland Ferries Ltd. It is owned by the Minister of Transport.
The ship is powered by a pair of V-16 engines built by English Electric (Ruston Engine Division), each driving a Voith-Schneider propulsor, one forward and one aft. On June 21, 2013 it was announced that the engines would be replaced, and that may be part of the current work (See the large opening in the ship's hull amidships). 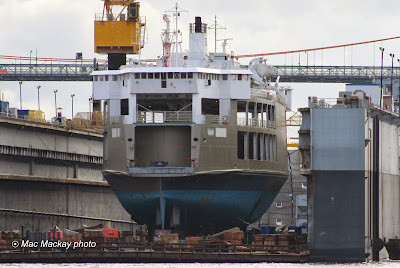 The vertical blades of a Voith Schneider unit are visible when she is in drydock, mounted just aft of a vertical fin. The blades are suspended from a revolving turntable. By changing the pitch of the blades, more or less thrust can be applied in different directions. The ship thus has superior maneuverability, and can move sideways, without the need of additional bow and stern thrusters.
One of the more difficult pieces of ship's machinery to describe in words, the Voith-Schneider propeller can be seen in action on the J.M.Voith web site in a short video:
http://www.voith.com/en/products-services/power-transmission/voith-schneider-propeller-10002.html