Atlantic Companion - an aversion to tugs

1. Atlantic Companion  enters the Narrows on departure, with a stiff breeze blowing cross channel (the flags on the ship's mast are flying strait out.)

The Con Ro Atlantic Companion made its regular westbound call in Halifax today -a day earlier than the usual ACL call, probably to get to New York before the US Thanksgiving holiday.
In view of my recent blog about tethered escort tugs in the Narrows, it is interesting to observe that the ship may have arrived and tied up this morning without any tug assistance at all. At one time ACL ships routinely made "tug free" calls. Since the ships are equipped with bow and stern thrusters they berth and unberth more easily than most ships. However they have been using tugs much more frequently in recent years, and have frequently used a tethered escort tug in the Narrows - at least until there was extra charge for it..
This afternoon, with the breeze having picked up, the ship left with one tug to assist it off the berth and turn it  but the tug was not tethered during its transit of the Narrows.The tug Atlantic Larch remained close to the ships for the transit. Untethered, a tug can only be of limited use if needed, and tying up to an underway ship in a wind could be a challenge.


2. Atlantic Larch takes up position aft of the ship as it enters the Narrows, but remains untethered. (That is HMCS Fredericton at the trot buoys in Bedford Basin in the background) 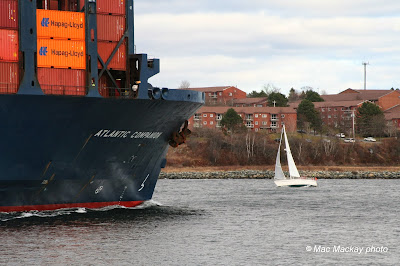 3. Even on a cold and windy day in late November, you can't count on having the Narrows all to yourself.
.
Posted by Mac at 5:05 PM