No to Wilson Split

A company called Eastern Bulk Shipping Ltd applied to the Canadian Transportation Agency for a coasting license to operate the Barbados flag ship Wilson Split in the stone aggregate and sand trade in eastern Canada. A number of existing Canadian companies objected to the application stating that they had suitable Canadian flag ships available. The CTA found that indeed there were suitable Canadian ships available, and recommended against the application.
Eastern stated that they acquired the ship and would be moving it to Canadian registry, but that has not happened yet.
Built in 1977 for Jebsens as Reksnes, the ship carried the name General Valeriano from 1986 to 1992, and made several calls in Canada at that time. It was a gearless bulk carrier of 3844 gross tons, 5900 deadweight tonnes. 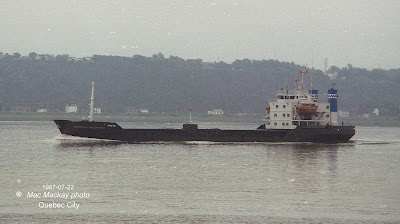 It was renamed Wilson Split in 2008, and a traveling gantry has been installed that carries an unloading crane. It has been operating widely throughout Europe.