The Coastal Shipping Ltd tanker Travestern arrived yesterday (in thick fog) and anchored in the harbour until this morning when it entered the Novadock floating drydock at Halifax Shipyard.

Coastal (part of ther Woodward Group of Goose Bay, NL) acquired the tanker in March of this year from Rigel Shiffahrts of Bremen, Germany.
It arrived in Lewisporte March 11 after waiting several days for icebreaker assistance, and was registered in Canada on March 15. A chemical / product tanker of 11,423 gross tons and 17,080 deadweight, it was built in 1995 by MTW Schiffwerft in Wismar, Germany.
It is one of three sister ships  bought by Woodward (Alsterstern and Havelstern inn 2011) to replace older units of the fleet. The ships have been very busy this summer running from Saint John to destinations in Newfoundland and the far north.

Coastal has recently taken to keeping ships names from previous owners, however in their earlier ships they did select family or local names.

Among those names was Sibyl W., used twice for Woodward Group ships.

Sybil W. (i) was the former Imperial Quebec. Built by Collingwood Shipyard, it was launched August 21,
1957 and delivered in December. At 375' x 52' x 27' depth, it was too large to transit the old St.Lawrence canals, so was confined to the Lakes until the St.Lawrence Seaway was opened in 1959. It was then fitted with a bulbous bow and saw service on the coast and as far afield as Frobisher Bay and Venezuela, based out of Halifax. 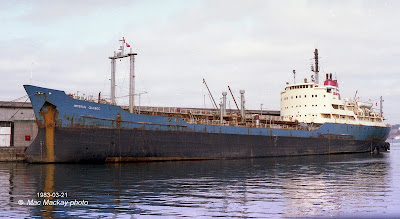 2. Imperial Quebec alongside pier 23 in Halifax March 21, 1983 for some minor repairs, the ship shows off her bulbous bow.

The ship started life with the traditional Imperial Oil black hull and red superstructure, but looked far better with the blue and cream scheme. It was also smaller than the newer ships at 4,679 gross tons, 6150 deadweight. With those larger fleetmates working more efficiently and some mechanical problems, Imperial sold the ship to Woodward in 1987.

3. In 1982 she was starting to have some engine issues and was easily identified from a great distance by her smoke plume.

Renamed Sibyl W. by Woodward, the ship served Atlantic Canada and the north until March 1992 when she was sold to the Panamanian company SSS Trading and renamed Panama Trader. She was later re-flagged to Belize, but she was laid up in 1995 and scrapped at Guyamas, Mexico in May 1996.

Woodward meanwhile had added Sibyl W. (ii) to the fleet. It was also a former Imperial tanker, the much smaller Imperial Tofino, built in 1973 by McKenzie Barge & Marine Ways of North Vancouver. Designed to serve small coastal communities it originally measured only 650 gross tons. In 1979 it was lengthened 24 feet to about 170 ft loa and re-measured at 764 gross tons.
The ship made its first call in Halifax  September 1, 1992 and called here about once a year for a few years, but was mostly confined to Newfoundland and Labradorian waters.
4. The second Sybil W. in Halifax in 1995.

In 2009 as the fleet expanded again, Coastal Shipping sold the second Sibyl W. to Honduras Aero Marine S de RL of Atlantide, Honduras. They did not rename the ship and she is reportedly still in service as a bunkering tanker in the Atlantic anchorage off Panama.