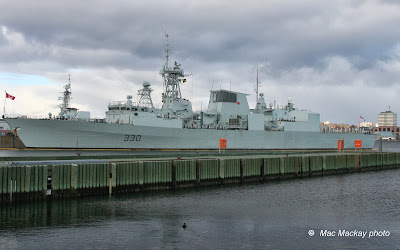 1. HMCS Halifax reposes at the Docyard this afternoon. [A Canadian maple leaf flag that appears to be flying from the ship's stern, is actually on shore in Dartmouth.]

Of the four east coast RCN ships undergoing FELEX (Frigate Equipment Life Extension) programs, three are "ex shipyard" and one is still in progress.
HMCS Halifax was the first ship in the program, and it emerged in September 2011, then spent many months alongside at HMC Dockyard for other related work. HMCS Fredericton came out in October 2012 and after a similar period alongside, is now working up.
HMCS Montreal left the shipyard in July and is still in the "alongside" mode at the Dockyard. while HMCS Charlottetown is in the graving dock at Halifax Shipyard. It is due for completion of the shipyard program in April 2014.


2. HMCS Fredericton has spent the weekend at the north end of Bedford Basin tied up to trot buoys for trials.

For a fairly complete description of the scope of these refits see:
http://www.naval-technology.com/projects/halifax/

According to the latest schedule I have been able to find, HMCS Ville de Quebec is next in line to start in the fall of 2014, followed  preceeded by HMCS St. John's in the winter of 2013-2014 and HMCS Toronto in the summer of 2015. This is quite different in the order of ships (and the end dates) from what was originally published.
Why there has been such a long gap between the current Charlottetown refit and the next Ville de Quebec start is a mystery to me.
Someday we will learn how close Lockheed-Martin came to budget and timetable.

Meanwhile defense industry fat cats, in Halifax this weekend for a conference, while not being chauffered around town in a fleet of Audis (with Ontario license plates), were told that the the French company DCNS is eager to sell their design to Canada for the next class of frigates to be acquired under the NSPS. This was not news, as the splendid FS Aquitaine was here earlier this year and impressed most people. 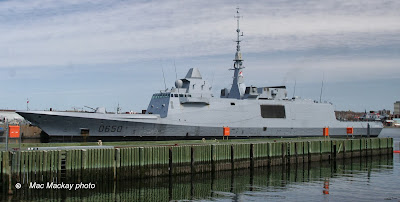 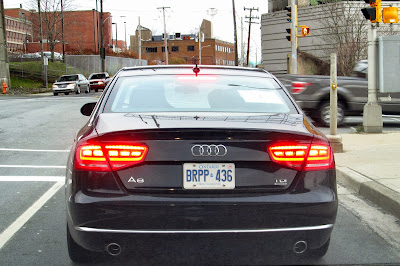 4. Spy Central in the background, and a license plate with indigestion in the foreground. I hope this security conference attendee did not over indulge on the way to work.
.
Posted by Mac at 5:59 PM