It could happen again [updated]

As we near another anniversary of the Halifax Explosion of  December 6, 1917, it is tempting to think about whether such an event could occur again.

In the infamous explosion two ships, Mont Blanc and IMO, collided in the Narrows (off pier 6). A fire ensued, igniting the cargoes of explosives on both ships. The resulting blast killed more than a thousand, maimed legions more, leveled the north end of town and sank or badly damaged a score of ships.

Nowadays a similar scenario is perhaps unthinkable, since two ships are unlikely to meet each other in the Narrows. We have radar, VHF Radio, Vessel Traffic Management, satellite navigation and lots of safety factors built in to shipping. But there is a scary "what if" which should be considered by the various authorities responsible for the the harbour. In fact it requires little imagination to see how that "what if"  might unfold because some of it has already happened and we were saved from potential disaster.

Late in the evening of November 4, 2013 or in the early morning hours of November 5, 2013 the post-Panamax container ship OOCL Oakland sailed from Fairview Cove for sea. As it transitted the Narrows it lost power. This is where the "what if" kicks in.

Fortunately none of these "what ifs" took place-for one very good reason. The ship was using a stern tethered tug to act as rudder and brake. The tug was able to keep the ship on its course as it gradually lost speed and controlled the ship until power was regained. Tethered escort tugs are used widely around the world, and have been proven to be able to exert tremendous forces to redirect or stop ships. The 4,000 to 5,000 bhp tugs in Halifax are capable of providing this braking/steering, but only if they are connected to the ship by stern line.
By slewing to one side or the other and using its power, the tug can slow or turn a the ship quickly.

Atlantic Oak, at 5,000 bhp is the most powerful tug in Halifax, and is the one usually designated for tethered escort. Here it is exerting some sideways thrust to the container ship Yantian Express to turn it as it exits the Narrows into Bedford Basin.

As food for thought all ships are NOT required to have tethered escort tugs while steaming through the Narrows, In fact some ships larger than OOCL Oakland do not always use tethered escorts, although they might have tugs accompanying them, the tugs are not made up with lines, so in case of emergency could push, but not pull.

The post-Panamax APL Cyprine enters the Narrows without a tethered escort. It is slightly larger than the OOCL Oakland. The tug is merely accompanying the ship, but with no line up it is limited as to what assistance it could provide if needed.
Update: The tug Atlantic Oak is indeed tethered by stern line to the ship in this photo- the line is slack and hard to see, but the tug could quickly control the ship if called to do so.

Large ships are built to sail the high seas efficiently. Once they get into port, and reduce speed they become less manageable. Due to a reduction in water flow past their rudders, they begin to lose the ability to steer effectively and lose steerageway completely at very low speeds.

Big ships take a long time to slow down, even from a speed of 8 knots, which may be their speed in the Narrows. If they cannot use the reverse thrust of their engines due to a loss of power, they then begin to lose speed slowly and lose steerage way at the same time, but can continue drifting (in some direction) for a mile or more.

Dropping an anchor from a moving ship is not an alternative. At most measurable speeds, the anchor will not hold on the bottom. Even if it just dragged on the bottom it would tend to slew the ship around as soon as it fetched up or snagged, creating a worse situation, particularly in a narrow channel.

Bow thrusters can be useful for course changes, but are most effective at low speeds to assist in docking. If a ship loses main propulsion power, it is likely to lose power to its thruster, since it is electrically driven from the ship's main power plant.


So let's go back to the what ifs:

1. What if the powerless ship (with no stern tethered tug) drifted into one of the bridges. Yes the bridge towers are protected by rock berms along the water line which could deflect a ship, but would be just as likely to hole it, slew it around and  still possibly damage the tower. Also large ships like OOCL Oakland have limited clearance under the centre of the bridge span. Would they have adequate clearance if they were off course by fifty of a hundred feet? No. Their signal mast or funnel could strike the bridge deck. 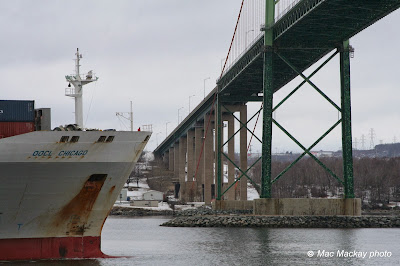 Rock berms around the bridge towers may protect the bridge from some types of strikes, but damage could still result to both bridge and ship.

2. What if the ship struck any of the piers, or the drydock at Halifax Shipyard (that has happened too) there would be damage to both ship and shore, and it could well be that the ship remained immobile for some time to come, blocking the channel. If the Narrows were to be blocked some Coast Guard ships and ships at Fairview Cove or National Gyspum could be trapped for a time.


An unescorted, laden chemical tanker passes under the A. Murray MacKay bridge. There may be dangerous goods in transit across the bridge too. Who knows what is in that container?

3. What if dangerous good were spilled or a fire started? Container ships carry dangerous goods - some lethally toxic or polluting, some explosive. The recent fire on Atlantic Cartier in Hamburg revealed that it was carrying a significant quantity of ammunition. As in the Mont Blanc, IMO case, sparks and leaks caused by impact, can start a fire very easily.

Atlantic Cartier (seen here in the Narrows with a tethered stern escort) caught fire while tied up in in Hamburg May 1, 2013. Longshoremen removed containers carrying ammunition before they could ignite. The fire was extinguished by shore based firefighters, and the fire was confined to the car deck. A burning ship which is not alongside a dock would be a different proposition.


Apparently those in authority do not want to contemplate these "what ifs". If they had, there would be regulations requiring large ships to use tethered escort tugs. Yes it costs money to hire an escort tug, but this is a public safety issue. Certainly for the ship's crews, but also for those ashore and along the waterfront.


On November 4, 2011, HMCS Preserver struck the Novadock at Halifax Shipyard, causing slight damage to both. Had it been a continer ship or tanker that struck, had there been a ship in the Novadock, it could have been much worse, and with more serious consequences.

For a port with the history of such a horrific disaster as the 1917 explosion, and with several recent events, it is a wonder that the use of stern escort tugs in the Narrows in not mandatory.

So can it happen again? Something similar certainly can.Do we need another disaster before authorities accept responsibility and make proper regulations?

Every large ship transiting the Narrows should have at least one tethered stern escort tug, and for the largest ships another tug made up alongside.It is interesting that they will need those two tugs to tie up once they reach Bedford Basin anyway.