Overseas Kimolos - a question of identity

The tanker Overseas Kimolos sailed this morning for Come-by-Chance, NL, but there seemed to be some confusion, either with the Atlantic Pilotage Authority or with Halifax Traffic (or me) as to the actual identity of the ship. Built in 2008 by STX Shipbuilding in Jinhae, South Korea, it flies the Marshal Island flag, and is owned by Capital Project Partners/Capital Ship Management but is on a 10 year bareboat charter to OSG, the Oversea Shipping Group. OSG has a buy option, but in view of its current bankruptcy protection status there is some question about whether the owners or OSG can terminate the charter early. As with all ships, it was assigned its own unique IMO number, in this case 938409. 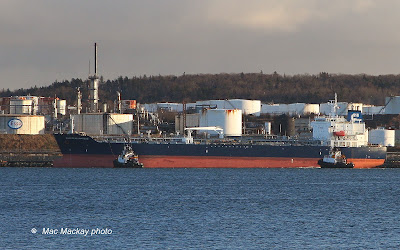 The pilot and Halifax traffic were using the ship name Kimolos (minus the "Overseas") this morning, but the word Overseas was still clearly painted on the ship's bow, and the OSG logo still appears on the funnel. There is another ship called Kimolos, a tanker of similar size, built in 2010, but it flies the Liberian flag and is currently anchored in the Mississippi River upstream of the Huey Long bridge, bound for Baton Rouge.Its IMO number is 9405540. Clearly not the same ship.

Adding to the confusion is the fact that a court action for relief from "tanker Kimolos Corp" has been filed against OSG. Presumably the Capital people have a one ship company to own the Overseas Kimolos, but other listings show that to be Belerion Maritime Co. The ship was built as Aris II (all Capital Ships' names begin with "A") but the ship was renamed before delivery in view of its bareboat charter. If legal proceedings have allowed Capital to get out of its charter or for OSG to renegotiate or drop its charter, it is possible that the ship would be renamed, and if so this may have happened in the last few days. Indeed the ship's name may now be Kimolos, but there are no outside indicators of that.