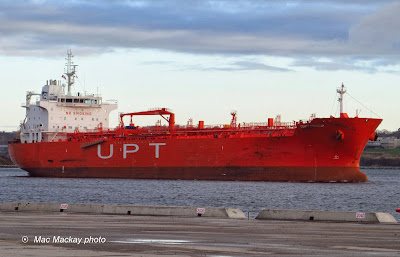 The tanker Conti Equator sailed this morning for Come by Chance, NL. The ship first arrived off Halifax October 27 and remained at anchor (except when it went out to sea for a while during strong winds) until November 3. It then tied up at Imperial Oil until yesterday when it moved to pier 27 to take on bunkers from a fleet of trucks. The trucks were there for first thing in the morning, but the ship ended up not moving until late afternoon.
I believe the bunker trucks came from Quebec. A long way to bring fuel!
The ship was built in 2008 by Hyundai Mipo in Ulsan, South Korea and measures 23,403 gross tons, 37,527 deadweight. Owned by Conti Holding, and operated by NSB Niederelbe Shiffs of Buxtehude, Germany, it is registered in Liberia and works in the UPT tanker pool.
Posted by Mac at 2:18 PM