Bedford Basin became something of a parking lot last night as a major storm swept through Halifax. High winds sent many ships to anchor in the Basin. Two tankers left their berths to anchor and three navy ships came in from exercises. The navy's research ship Quest also came in and anchored in the lower harbour in anchorage #6. 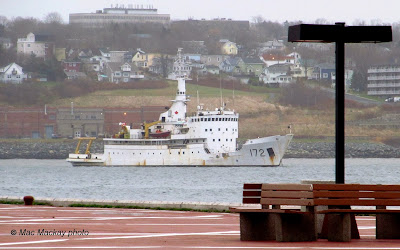 Also in the lower harbour the supplier Atlantic Condor left its berth for anchorage #2, but did not anchor. Instead it maintained position through the night using its dynamic positioning DP2 system.

The bunkering tanker Algoma Dartmouth went to pier 9B to avoid the swells which would be coming into its normal berth at pier 34. The larger ships Oceanex Connaigra (awaiting parts at pier 25-26), Oceanex Sanderling at pier 36 and Zim Savannah at pier 41-42 put out extra lines and waited out the storm.

Meanwhile back in the Basin, Algoscotia, which had been at Ultramar in Eastern Passage took up posiotn in the north end of the Basin. 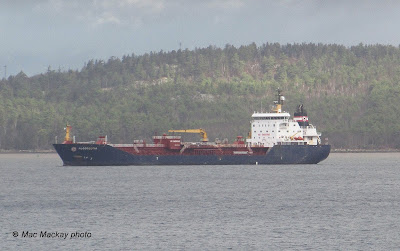 Also the tanker Overseas Kimolos, that had been at Imperial Oil, anchored in the north eastern sector of the Basin leaving lots of room for HMCS Iroquois to anchor closer to the Halifax shore.

HMCS Ville de Quebec (332) and HMCS Halifax (330) anchored close along the Rockingham shore, giving an opportunity for a before and after comparison of ships. Ville De Quebec has not had its FELEX modernisation yet, and Halifax has completed its refit. 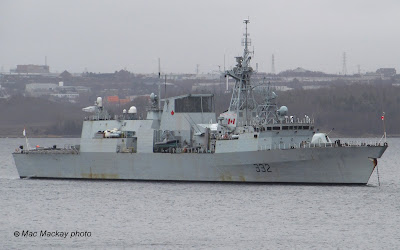 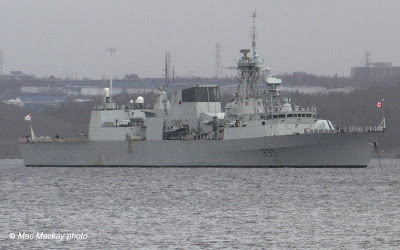 Ships in the Basin were almost joined by some wayward containers blown around at Fairview Cove. From what I could see, one was only shifted from its position, and the other tumbled off a stack onto the shore where it was then in the lee of the wind. 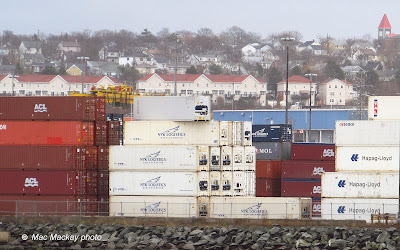 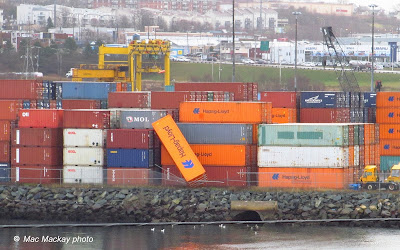 Container ships Atlantic Conveyor and Rotterdam Express at Fairview Cove and Zim Savannah  at Halterm resumed work this morning. Loading/unloading had been suspended yesterday due to high winds.