The Netherlands flag general cargo ship Flinterstar has been declared a constructive total loss after a collision in the North Sea off the Belgian coast near Zeebrugge in the busy Western Schelde Estuary.
There are scores of images of the wreck on line. e.g.:   Google Images 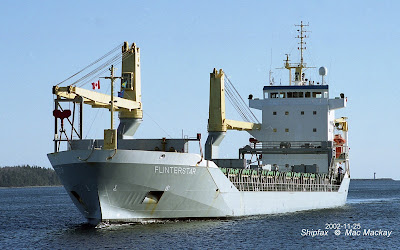 Nearly new in 2002, the ship sails into Halifax.

The ship, built in 2002 by Ferus Smit, Leer, of 6577 grt, 9122 dwt collided with the the gas carrier Al Oraiq, 122,000 dwt, and came off the loser. Flinterstar took a heavy list and grounded on a sandbank with its stern partially submerged. Leaking fuel oil, near a wildlife reserve, the ship set in motion a major Belgian/.Dutch rescue, cleanup and salvage operation. Smit/Multraship is engaged to pump out the remaining fuel, but the owners, Flinter Groep BV have stated that the ship has been damaged beyond economical repair. The ship's crew of 12 were removed without serious injury.

Flinterstar was well known in  some Great Lakes ports, but was also a visitor to Halifax in November 2002 when it delivered a cargo of steel tire cores for Michelin. Typical of many versatile Dutch cargo ships, it has two box shaped holds with pontoon hatch covers and carries a pair of 60 tonne cranes that can combine for a 120 tonne lift.
From June 2006 to June 2011 it carried the name UAL Africa while on charter to Universal Africa Lines.
For more info on the ship and its owners, refer to the excellent Flinter web site: http://www.flinter.nl/index.php/en