Pit stop and other unusual movements

Halifax seemed to be the spot for unusual ship movements today.

Although it started with the normal uneventful Saturday arrival of Maersk Pembroke at pier 41. It did its work and sailed at 16:30hrs. 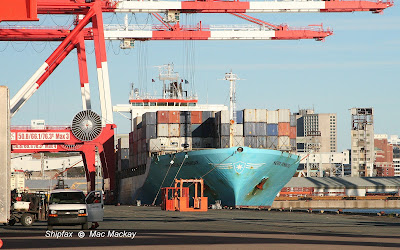 Maersk Pembroke had Halterm all to itself this morning when it tied up at pier 41. 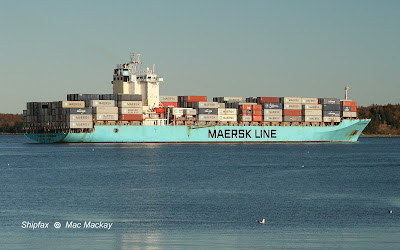 It was the last day of Daylight Saving Time, so departures such as this will be in the dark for months to come.

The next arrival was followed in an hour by its departure. BBC Pearl tied up at pier 37 in Halterm, but did not use its own gear nor the terminal's cranes to do some very quick work, then sailed again. It was tied up shortly after 09:00 and called for clearance a few minutes after 10:00. 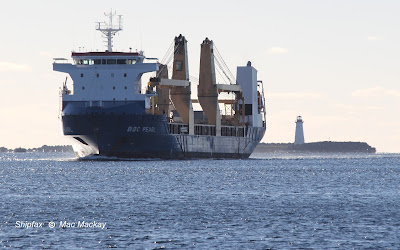 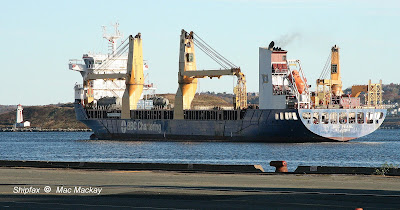 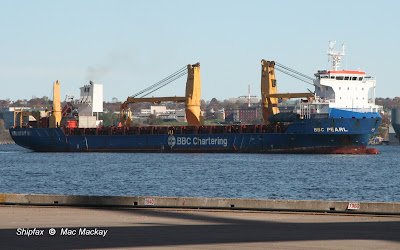 Some dunnage that was visible on deck on arrival was not there on departure. This was likely offloaded directly by some of Halterm's big forklifts.

The multi-purpose heavy lift ship was built in 2012 by Jiangzhou Union, Ruichang, China and measures 12,838 grt, 14,418 dwt and carries three cranes. Two cranes are rated at 400 tonnes each and the third at 80 tonnes. Launched as North Sea Carrier for Bocksteigel it was immediately renamed and joined the Briese Schiffahrts large fleet of specialized carriers. Its next port of call is Charleston, SC. 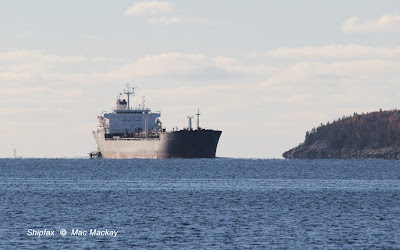 The next arrival, the tanker Skylark used the western channel inbound and passed very close to shore before swinging back into the main channel. Since it was carrying cargo, it took the escort tug Atlantic Oak all the way in from the pilot station. It was joined by the second tug Atlantic Willow inside the harbour. But as it was transiting, it also took a transfer of stores from the tug Gulf Spray, while on the move. This is a tricky operation, but the placid conditions today allowed it to happen without incident. 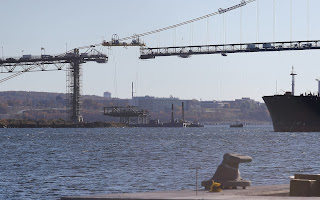 The second old deck section has just been landed on its barge.

Work on replacing the roadway of the Angus L. Macdonald bridge continued unhampered as the ship passed by and tied up at Nova Scotia Power's Tuft's Cove generating station.

The tug Gulf Spray (far right) has returned to its base after carrying out the transfer. Atlantic Willow (bow) and Atlantic Oak (stern) begin to nudge the tanker towards its berth.

Skylark was built in 2004 by Dalian Shipyard in China and measures 22,184 grt, 34,620 dwt. It is operated by Mariwave of Amsterdam under the Liberian flag.

The next arrival was the autocarrier Dover Highway. Built in 2011 by Imabari Zosen in Japan, it flies the Japanese flag for K-Line. 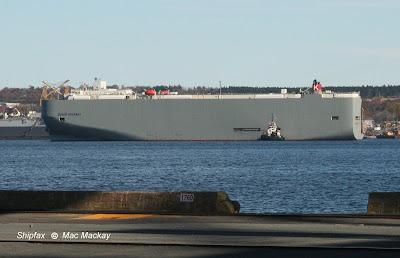 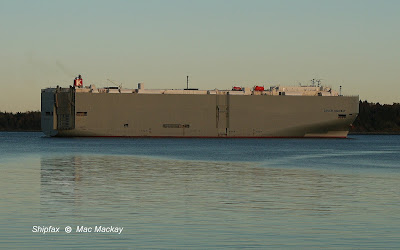 It was a sunset (Daylight Saving Time) departure later in the afternoon.