Back in December 2014 the Hansa Heavy Lift ship HHL Mississippi arrived in Halifax from Chicago and deposited a set of heavy cargo spreaders on pier 27. At the time it was understood that another ship would pick them up. 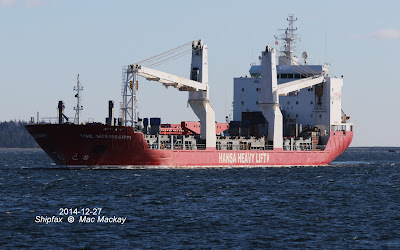 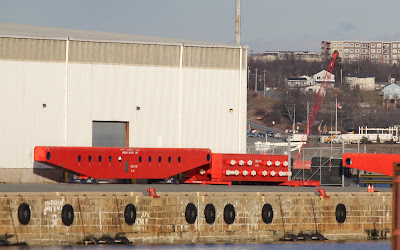 Those 770 tonne SWL spreaders sat on the end of pier 27 until today when they were lifted aboard the heavy lift ship Hong- and therein lies a tale.

The ship that was due to pick then up was then called HHL Hong Kong. Launched as Beluga Preparation, it was delivered as Beluga Shanghai in 2010 by Hudong-Zhonghua in Shanghai. Measuring 17,634 grt, 20,668 dwt, it was part of a new generation of extra heavy lifters for Beluga. Fitted with one 180 tonne crane forward it also had a pair of 700 tonne cranes that could combine for an impressive 1400 tonne lift. When Beluga failed, successor Hansa Heavy Lift renamed the ship HHL Hong Kong in 2011.

HHL sold the ship to Hong Shipping UG (Auerbach Bereederung, mangers) in December 2014, but a dispute arose between Hansa Heavy Lift and Hong and various lenders, resulting in the ship's detention off Baie-Comeau in December 2014. At that time the ship was renamed Hong. As various wranglings worked their way through courts the ship languished until early this month when it was permitted to sail. It came directly to Halifax, loaded some containers that were related to the speaders, and finally the spreaders themselves. 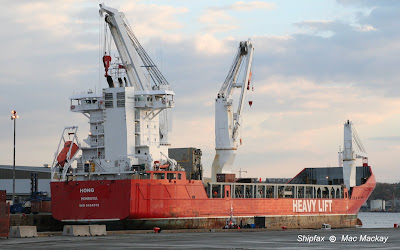 Hong at pier 27 today. The tug Gulf Spray with refuse scow and motorboat come alongside to take off some well aged international garbage.

Since ownership records usually lag behind the actual transactions, I have not yet discovered if the ship has been sold recently.Certainly the "HHL" has been painted out on the ship's sides, probably when the name was changed. This meant the end of the relationship with HHL  was severed. It was also reported that Hong Shipping was insolvent, so it is possible that another name change is in the offing. The spreaders had "Hansa Heavy Lift" painted on them when they arrived in Halifax, but it is likely that the spreaders belong to the ship, so that is why they were not picked up by any other HHL ship in the interim. 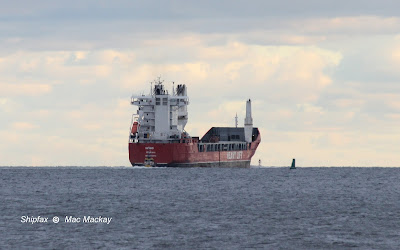