My turn, then your turn 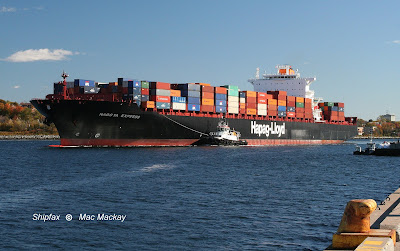 Nagoya Express heads through the Narrows with Atlantic Larch on the port bow and Atlantic Oak (not visible) as tethered escort astern. 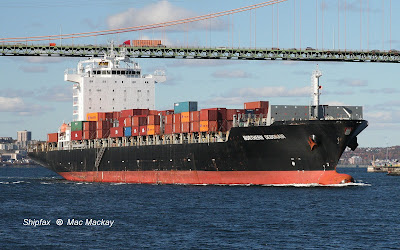 As a Hapag-Lloyd container crosses the A.Murray MacKay bridge just astern, Northern Debonair works its way through the Narrows. It is under the size required to have an escort tug.

Northern Debonair is also a first time caller, and is here on ACL service. It was built in 2007 by Shanghai Chengxi as CSAV Rahue but became Northern Debonair on delivery to owners Norddeutsche Vermogen From 2011 to 2012 it carried the name of NYK Lyttleton. It measures 35,975 grt, 42,183 dwt, and carrues 3534 TEU, including 500 reefers.