Another pair of Canadian ships have arrived in Aliaga, Turkey for scrapping.

Many Canadian ships that have been sent overseas in recent years have gone there, not only because it is closest, but because among ship scrapping operations it is thought to be the least environmentally damaging. Its work practices are also much more safety oriented than scrapyards in Asia..

News from India indicates that two yards in Alang have achieved international certification of its shipbreaking techniques.  This may force other Indian yards and those in Pakistan and Bangladesh to follow suit. Export restrictions in the EU prevent ships from going to those countries due to environmental and safety concerns.

The two Canadian ships from Canada Steamship Lines have been replaced by new ships, and sailed under their own power to Turkey.

First to go was Birchglen, once a Halifax caller when it was newly built.
It came from Govan Shipbuilders Ltd in Scotland in 1983, one of three bulk carriers built for Great Lakes  and ocean work. Canadian owners Misener Transportation named the ship Canada Marquis after the early maturing, high yield wheat that revolutionized wheat farming on the Canadian prairies.
Worth reading: Canadian Encyclopedia entry on marquis-wheat 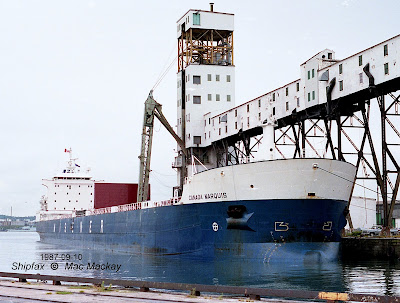 In its early years Canada Marquis brought grain to Halifax, and as a gearless ship, it used the grain leg at pier 26. Self-unloaders supplanted the gearless ships, and now discharge directly into the grain conveyor.

In 1991 the ship was sold and became Federal Richelieu then Federal Mackenzie and in 2001 Mackenzie. It continued to trade into the Lakes, but under the Hong Kong and Philippine flags.

In December 2002, CSL acquired the ship and renamed it Birchglen under the Canadian flag in early 2003. It did however go back to international trade in 2004 under Barbados flag, but came back to Canadian flag in 2006. It was laid up in Montreal at the end of the 2014 shipping season and was not reactivated in 2015 until it sailed for Turkey. It arrived in Aliaga October 15.

The second ship, Mapleglen was built in 1980 by NV Cockerill, Hoboken, Belgium as Federal Maas. It became Lake Michigan in 1995 and continued operating into the Great Lakes for Fednav. I have no record of it ever calling in Halifax.

Not at sea, but in Lake Erie, the ship Lake Michigan heads to sea. The photo was taken in the Pelee Passage, south of 42 degrees lat. but still in Canadian waters.

Mapleglen sailed from Montreal September 27, and after a boiler burn out it stopped over in Quebec City. The boiler was used to heat heavy fuel, and was beyond repair. After unloading its heavy fuel and loading diesel fuel it was able it to continue its trip. It took shelter off Tracadie, NS for a couple of days around October 5 as Tropical Storm Joaquin passed offshore. Once clear, the ship transited the Canso Canal and made its way out in to the Atlantic.It arrived in Aliaga October 17. 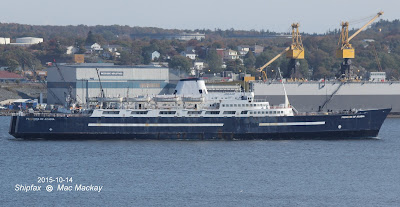 One last run for Princess of Acadia as she sailed from Halifax October 14 for naval exercises. She returned to port October 16.

The next Canadian ship to go may be Princess of Acadia, which returned to Halifax Friday night after military exercises off Yarmouth.  Its machinery is still in good condition, so there would be little reason for it not to sail on its own, and probably to Turkey. If it has to go through the cumbersome Crown Assets Disposal process, it could be many months before that actually happens however.