Monge and a flashback

The arrival on Monday October 5 of the French satellite tracking ship Monge brought back memorties of the cold war days in Halifax.

But first the Monge. Built by Chantier de l'Atlantique, Saint-Nazaire, it was launched in 1990 and in service by 1992 as a missile range instrumentation ship for submarine launched missiles, but also for satellite tracking. Its prominent radomes indicate its purpose at once, but it is a naval vessel (A601) and is lightly armed and can carry a helicopter. It carries a full naval complement of 186 and 15 civilian technicians.
A large ship, it is 225m long and displaces 21,000 tonnes and has a range of 15,000 n.mi. with a speed of 16 knots powered by two Pielstick engines driving a singe screw twin screws.
Often stationed in hot climates, its hull is painted white to aid in cooling its vast array of electronics.

A very wide angle view of Monge at HMC Dockyard. The oil boom has been deployed as the bunkering tanker Algoma Dartmouth was just about to come alongside.

Now for the flash back. In t dark days of the cold war the USSR also built a fleet of satellite tracking ships that were used to monitor the USSR's space program and to do upper atmosphere and outer space research. The ships also kept very close tabs on the US space program and were often to be seen in Halifax following major US rocket and spacecraft launches and re-entries.


Kosmonaut Vladimir Komarov was built by the Khersonskiy Shipyard as the merchant ship Genichesk in 1966 but was converted almost immediately for satellite tracking. Its huge radomes were enclosed in golf ball like housings. It measured 13,935 grt in 1967, and was based in Odessa and operated by the state owned Baltic-Black Sea Shipping for the USSR Academy of Sciences. It also had a large crew of over 200.

Kosmonaut Vladimir Komarov at pier 21, with Halifax civilians getting a close up look. It may have been the Cold War, but there was unfettered access to the pier faces in those days.
(My apologies for the quality of this 1968 photo taken on a 620 fixed focal length camera - in deep shadow).

Kosmonaut Yuriy Gagarin (also spelled Yuri in some places) was purpose built in 1971 by the Baltic Shipyard in Leningrad. A very large ship oif 31,300 tons it was steam turbine powered and also based in the Ukraine, operating ostensibly for the Soviet Academy of Sciences, with a largely civilian crew (with the usual quota of political officers). 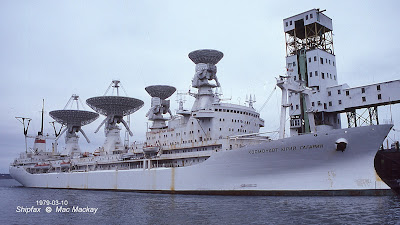 A supremely dignified ship, despite its mushroom factory upper works. I needed my newly acquired 28mm wide angle lens (on my new to me Olympus OM-1) to get it all in. 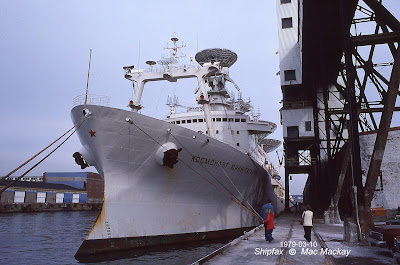 Again, civilians getting a close up look at pier 26.

There were objections to the ships' presence in Halifax, as provocative, so they were banished to Sydney, but continued to call there for stores and crew R&R.

When the USSR collapsed, the ships were transferred to the Ukraine Academy of Science, but both were soon broken up.
Kosmonaut Vladimir Komarov was broken up in Alang, India in 1994.

Kosmonaut Yuriy Gagarin was renamed Agar and sent to Bangladesh scrappers in 1996.

These were only two of several USSR ships with tracking capability, the others much smaller. Akademik Sergei Korolev  is another that comes to mind, that was fitted with large antennas (It was broken up in Bangladesh as Agar Alang, India as Orol in 1996). There was also a class of ships that were nominally fisheries, hydrographic or oceanographic researchers, but were probably doing a lot of underwater listening, such as Professor Vize.

Invariably painted white and attractively styled, they explained away the white colours as typical of research ships (Canada's Hudson and Baffin for example, but also Quest). But the white was no doubt helpful while stationed in the Caribbean down range of Cape Canaveral, in keeping the electronics cool. 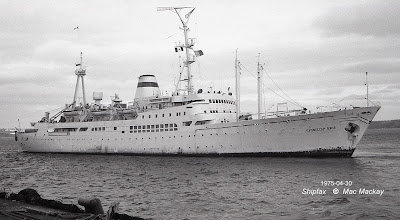 Professor Vize had a lot more antennas and other strange devices than you would expect to see on a lowly hydrographic research ship. It was supposedly doing iceberg research and maybe it was.