For its call in Halifax today the giant Regal Princess made an abbreviated visit, arriving at the pilot station at 0545 hrs, but sailing at 1430 hrs.  It is only headed to Saint John, NB so will be loafing along at 15 knots to reach there for 0630 hrs at the pilot station.
It also seemed to be carrying far less than its capacity of 3,560 passengers.  Perhaps they were just not out on their private balconies in the very chilly, but sunny weather. 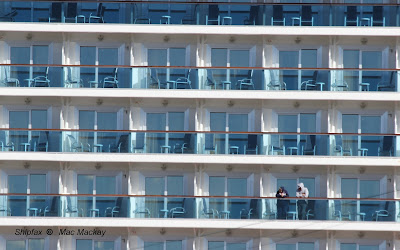 This was the ship's fifth and last call this season. (It would have been six calls but its first was cancelled see Shipfax September 24.) I won't miss its multi note horn signal when it sails. neither will the pigeons and gulls who take flight in panic when the tune sounds - twice - before the ship leaves the dock. It is apparently the first few notes of the theme music to the TV program Love Boat.
If you have been (un)lucky enough to miss it - try this YouTube clip: https://www.youtube.com/watch?v=dbUqofMcsG4 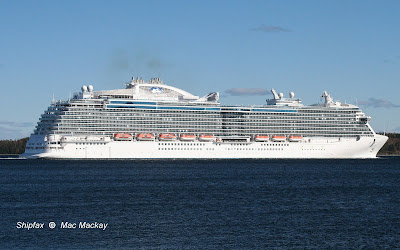 The cruise season has peaked but there will still be about fourteen calls between now and November 2. 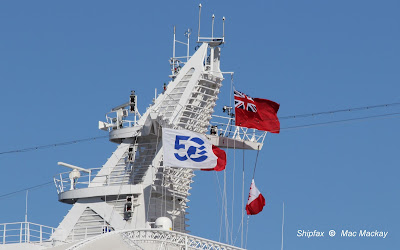 Princess Cruise Lines is celebrating its fiftieth anniversary this year, by recreating its first cruise of December 3, 1965. Interestingly that first cruise was on Canadian Pacific's coastal steamer Princess Patricia from Vancouver to Mexico.

There is an excellent history of the line here: http://cruiselinehistory.com/history-of-princess-cruises-50th-anniversary-of-the-love-boat/