All the action - such as it was, took place in the lower reaches of the harbour today. The CMA CGM Don Giovanni was in all day on its first call in Halifax. Dating from 2006 when it was built by Hyundai Samho, the 91,649 grt, 108,000 dwt ship was launched as E.R. Toronto for ER Schiffahrt GmbH + Cie KG. It immediately went into service for CMA CGM taking its present name, and flying the Liberian flag. With a capacity of 8204 TEU (including 700 reefers) it is the new normal size for Halifax.

CMA CGM Don Giovanni gets away from Halterm at dusk. 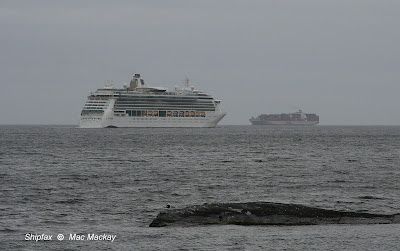 Serenade of the Seas takes the western channel for OOCL Luxembourg.

Meanwhile Serenade of the Seas sailed on time and made its way out the western channel to give the OOCL Luxembourg the main channel. 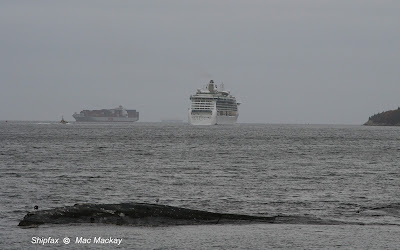 The pilot boat is outbound to disembark from Serenade of the Seas and embark a pilot on the distant inbound Triton Ace, just visible on the horizon.

Because CMA CGM Don Giovanni was late leaving, OOCL Luxembourg had to hang off outside Neverfail Shoal. With pilot aboard, it came to a stop and went a bit cross wise in the channel, and even reversed to straighten out - first time I've seen that happen. 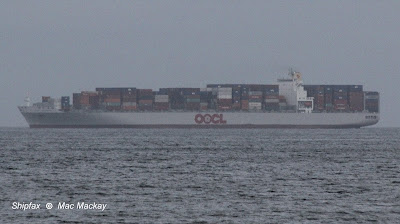 Following all this, the autocarrier Triton Ace was inbound and it had to slow down too.

It was busy times for the tugs too, as all three Atlantic Towing tugs were working.

Atlantic Willow and Atlantic Larch (left and right) have just cleared CMA CGM Don Giovanni and are going out to meet Triton Ace, while Atlantic Oak (centre) stands by for OOCL Luxembourg.

In a few days these photos will not be possible due to much shorter days and the end of Daylight Saving Time. Shipfax will thus be entering the Dark Ages once again and will be resorting more to the Archives for posts.