There were four container ships in port on Saturday and three more on Sunday, making for a very full house.

Saturday's arrivals for Fairview Cove were Herma P for Hapag-Lloyd on the G-6 service and Atlantic Compass for ACL. 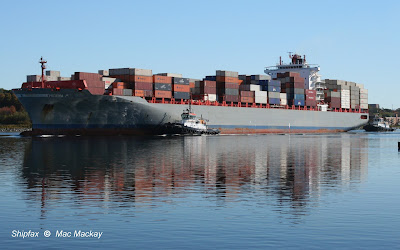 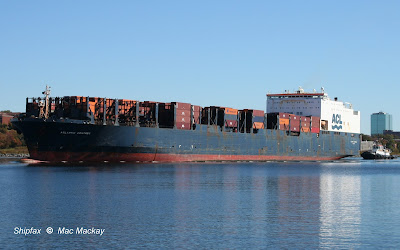 The big Lift project, to replace the roadway of the Angus L. Macdonald bridge got underway on Saturday, with the first old section lowered to a barge and continued on Sunday with the raising of the first new section. In all 46 sections will be replaced in this way, working across the centre span of the bridge. There were no ship traffic restrictions this weekend (except the cautionary for ships to make a low wake in the area). As the project continues however, there will be over night stoppages for harbour traffic. The process of roadway replacement will take until 2017 and will be done in this way to allow for normal bridge traffic during the day. 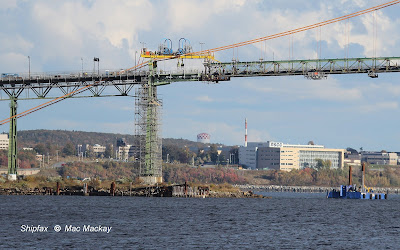 The first new section of roadway was lifted into place on Sunday. It was hoisted from a barge by the yellow gantry unit. 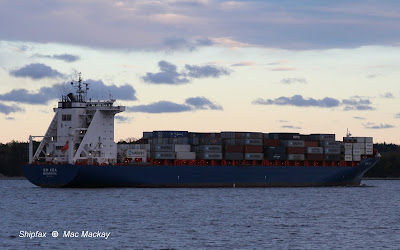 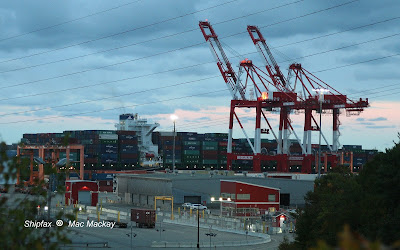 UASC Zamzam was here for the first time. Renamed this year from Asiatic Summer it is a 94,784 grt, 112,171 dwt ship with a capacity of 9034 TEU - the largest yet to visit Halifax. It flies the Singapore flag for owners Asiatic Lloyd and was built in 2014 by Hyundai Samho.
It arrived and sailed in the dark.

On Sunday Fairview Cove was full again with NYK Demeter and NYK Rumina  Halterm had 'only' Berlin Express on its east bound call. [The later ship has eluded my camera on several occasions, including today.]

Autoport was chock a block once again, with Pleiades Spirit on Saturday, Grande Napoli early Sunday and Hoegh Bangkok later, staying until Monday. 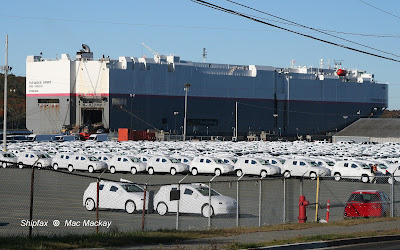 Pleiades Spirit was built in 2008 by Toyohashi Shipbuilding and measures 60,330 grt, 17,424 dwt. It is owned by Mizuho Sangyo and flies the flag of Panama. It is operated by World Wide Marine but its commercial activities are managed by Nissan. 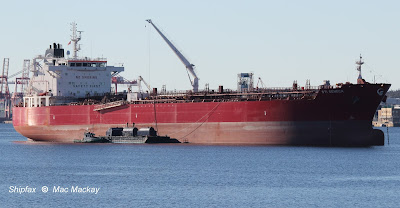 STI Seneca stopped at anchorage for a few hours to pump out something into containment units on a Dominion Diving barge, with tug Roseway in attendance. 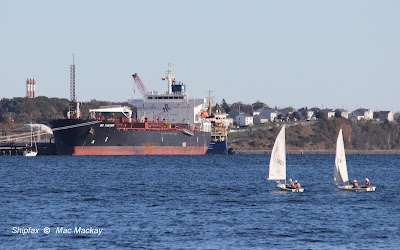 Diehards got in some of their last sailing on Saturday as BW Panther  occupies number 4 berth and Algoma Dartmouth uses number 3 berth at Imperial Oil.

BW Panther was launched by SPP Shipbuilding Co of Goseong, South Korea in 2014 as Elandra Panther, but was renamed on delivery to BW Maritime of Singapore. It has typical handysize dimensions of 29,737 grt, 49,999 dwt.

If that wasn't enough the offshore supply boats seemed to be busy with all three Shell charters gearing up for work, as the drill ship Stena Icemax is finally on its way toward the Shelburne Basin to begin drilling for Shell Oil. The ship is off Florida now and will be in position in a few days. It not expected to call in Halifax.

See also Tugfax for more on the suppliers.