Triton Ace out, Cape Roger in

Yesterday's arrival at Autoport (seen only on the horizon in yesterday's post) sailed this afternoon after completing its cargo work. 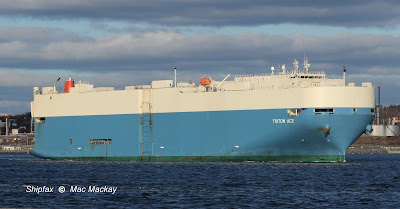 Triton Ace dates from 2009 when it was delivered by Imabari Zosen, Marugame to NYK Line and placed under Mitsui OSK Line commercial management, flying the Panama flag. Listed at 60,8766 grt, 22,723 dwt  it is of the largest class in the MOL fleet with a capacity of 6400 cars.

To give it room to pass around Ives Knoll, the inbound CCGS Cape Roger worked well over the west, for a starboard to starboard passing. 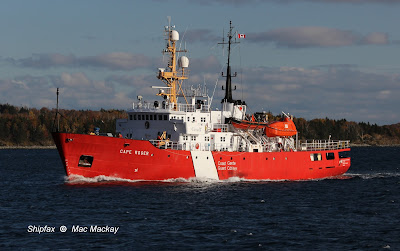 Built in  1977 by Ferguson Industries in Pictou NS, the 699 grt vessel is based in Newfoundland and was scarcely seen in Nova Scotia until the 2000s. It works out of Halifax sometimes, covering for refits of other ships or ice conditions. The CCG fleet in Newfoundland and Nova Scotia is particularly short handed now with CCGS Earl Grey and Edward Cornwallis in refit and Ann Harvey in repair.

Cape Roger received a major refit in 1996 in Shelburne, NS, and again in 2010-2011 at the now defunct Seaway Marine Industries yard in Port Weller, ON. However its helicopter deck remains decommissioned.

New Offshore Patrol Vessels (OPVs) (up to five in number) are among the vessels to be built by Seaspan in Vancouver under the National Shipbuilding Procurement Strategy.