Oceanex has made application to the Canadian Transportation Agency to bring in an as yet unnamed foreign flag ship to operate between January 1 and July 31, 2016. The application states that the ship will operate Montreal / St.John's and Halifax / Corner Brook / St.John's. (however Oceanex dropped Corner Brook from its rotation several years ago.)

It appears that Oceanex will be sending some or all of its ships for refit, and will need a temporary replacement.

Oceanex Sanderling last had a major refit in 2011. It was out of service from January 29 to March 12, but was in the shipyard at Gibraltar for one month, February 5 to March 5. Dating from 1977 the ship must be near the end of its service life, so it may be in for a major refit this time.
It maintains the weekly (twice weekly this past summer) Halifax /St.John's service singlehandedly.

Oceanex Avalon, pictured above doing a solid 19.9 knots on the St.Lawrence was delivered in May 2005. Built new for Oceanex by J.J.Sietas KG in Germany, it has no RoRo capability. 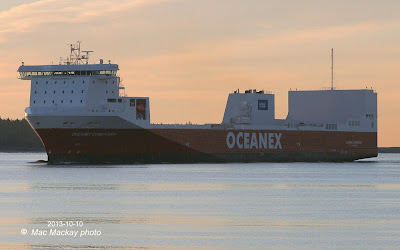 Although Oceanex Connaigra, built in 2013, had serious teething problems early in its career, requiring shipyard work on its propeller hub, it appears to have settled into its routine over the past year and regularly maintains 20 knots on its Montreal / St. John's service.

In past years when a replacement was needed Oceanex (or its predecessor company) has used a variety of craft, ranging from the mighty midget Astron (which amazingly is still operating for Coastal Shipping seasonally.) 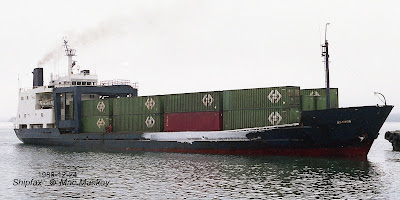 In 1988 Astron was called in as a substitute. 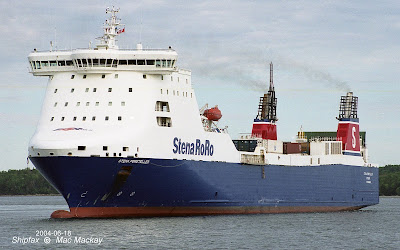 In 2004 however they brought in the Swedish Stena Foreteller. This impressive RoLo was built in 2001 by Dalian Shipyard in China and measured 24,688 grt, 12,4300 dwt. With 3,000 lane meters capacity it was certainly able to handle Oceanex's RoRo traffic. I suspect it was less handy for LoLo.

It is unlikely we will see Stena Foreteller this time around. Since January 2015 Stena Foreteller has been operating a weekly Stena/Mann Lines service between Harwich, Cuxhaven, Tallinn (Paldiski), Turku and Bremerhaven. At times the ship reaches its maximum speed of 24 knots on this run to meet the aggressive schedule. It also has a passenger capacity for 12 drivers, which would not be needed by Oceanex.

With more than 50 RoRo ships in its fleet it seems likely that Oceanex might turn to Stena once again.