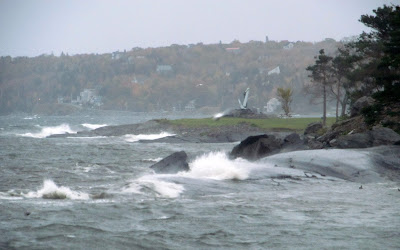 Conditions in the harbour were fairly ferocious yesterday, bu were considerably wilder out at sea.

The small cruise ship Saint Laurent was due in Halifax October 26 on the completion of its summer cruise season on the Great Lakes and St.Lawrence. Due to inclement weather, the ship arrived October 28 and remained in port for two nights. It is scheduled to sail late this afternoon. 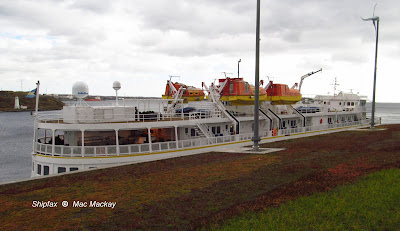 The green roof over the Farmers' Market at Pier 20 has taken on its fall colours as Saint Laurent waits for sailing time.

It is a small ship, and I would not want to be out on it in the weather we had yesterday, however this has meant that the operators, Haimark, have had to cancel the next scheduled cruise, which was a 15 day jaunt out of Portland, ME to the Bahamas. Many unhappy passengers are holed up in hotels in Portland and booking trips home - and making claims on their travel insurance.

Passengers in Halifax however have been enjoying extra shore excursions, although some are obviously content to remain on board for meals. 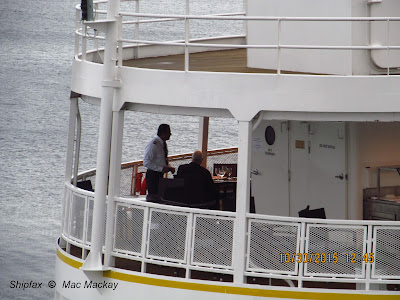 There must be radiant heating panels over the dining area on the fantail, because it was no more than 10 degrees C when I took this picture.

It is very late in the cruise season for Halifax, with just two more ships scheduled for next Monday and Tuesday, but at this time of the year weather is bound to be a factor in any travel plans.

The ship made its first calls here June 4 and 12 then went on to the Lakes. An accident in the St.Lawrence Seaway, when the ship rammed the concrete wall at the end of the Eisenhower Lock, took it out of service for several weeks. 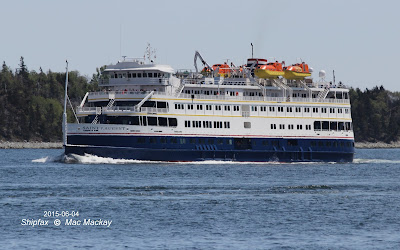 * Footnote: the term "storm-stayed" may be unique to Scotland and parts of eastern Canada. It means stranded due to bad weather.