Ringing in the New Year


The offshore standby vessel Atlantic Tern had the distinction of being the first arrival of 2019. It was returning from its duties at Deep Panuke. The Encana facility stopped producing gas in May 2018 and is now in the dismantling process.  Fleet mate Atlantic Condor was built at Halifax Shipyard in 2010 for a ten year renewable contract as supply vessel for the troubled gas project. 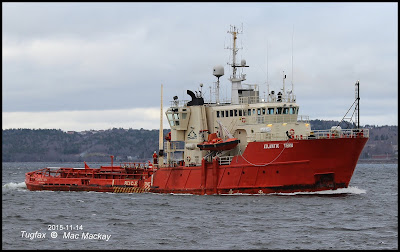 Atlantic Tern has a rough job standing by off Sable Island for a month at a time.

The other offshore gas producer, Sable Offshore Energy made the surprising announcement that it is halting production this week - one year earlier than planned. The Exxon Mobil lead project (with Shell, Imperial, Pengrowth and Mosbacher) came on line in 1999. It is also in a dismantling process.

Heard but not seen for its arrival January 1 was the bulker Salarium. The ship arrived in very restricted visibility but its "fog horn" could be heard until it was secured at anchor in the lower harbour. Returning from Saint John, NB, where it had unloaded a cargo of road salt, the ship is en route to its loading port in the Magdalen Islands. Its stay in Halifax was brief, sailing again this morning less than 24 hours after arriving. Its visit was to shelter from very high winds last night. With the ship in ballast, it would not only be uncomfortable, but potentially dangerous at sea.

The ship was built for Great Lakes trade with limited seagoing and is restricted to Canadian waters south of 52 degrees latitude, and is permitted to go to St.John's, NL and "the eastern seaboard of Canada." which includes Halifax, Saint John. NB and the St.Croix River to Bayside, NB.

When laid down by the Collingwood Shipyard, it was with the intention of naming it "Gleneagles" reviving a traditional CSL name. However it was launched as Nanticoke, named for a new Stelco steel mill built near the town of the same name, on Lake Erie. CSL had long standing  contracts to deliver iron ore to Stelco and it was a fitting choice. (The plant was located on Lake Erie, which allowed it to receive iron ore from upper lakes ports without having to send ships down through the Welland Canal to Hamilton.) A nearby coal fired generating plant provided power for the mill (until it was closed in 2014).  CSL was also in the coal delivery business. 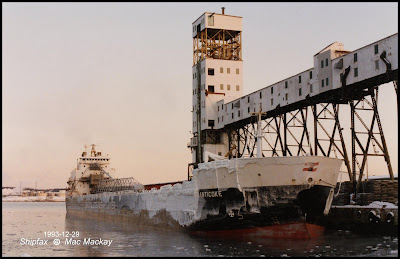 Afrer an end of season grain delivery, Nanticoke was about to shift to Natyional Gypsum for its backhaul cargo.


A Seaway size self-unloader, Nanticoke plied the other usual routes for CSL carrying grain, gypsum, coal and ores. It also participated in the early top off operations in the Strait of Canso and Sept-Iles Bay where CSL self-unloaders completed the loading of large deep sea ships that could not load to maximum draft in their usual loading ports.

CSL self-unloaders used to have black hulls, which were thought to be more serviceable in view of the coal and other dirty cargoes they carried.

In May 1997 Nanticoke, Atlantic Huron (a regular Halifax caller) and Atlantic Erie (scrapped in 2016) were fitted with special cargo handling systems to deliver magnetite, in slurry form, to ballast the Hibernia Gravity Base structure on location off Newfoundland. The ships were converted and "unconverted" in Halifax. 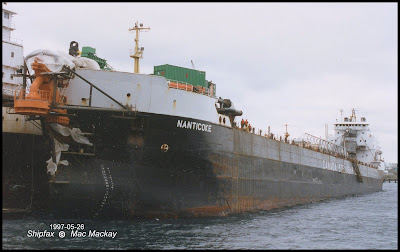 A large pipeline was attached tho the ships' bows and pumps were used to move the heavy ballast
from shore to ship, then to the gravity base, well out at sea. 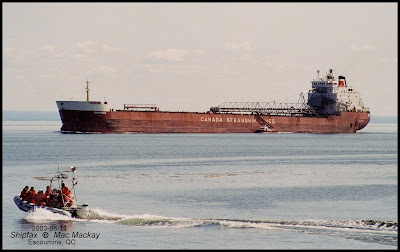 Not long after the Hibernia Challenge, CSL began to paint its self-unloaders with traditional red hulls, once reserved for bulkers and general cargo ships.
Here Nanticoke disembarks its pilot at Escoumins as a whale tour boat sets out.

In 2009 CSL signed a long term contract to carry salt for (what is now) K+S Windsor Salt/Morton Salt, Mines Saleines in the Magdalen Islands. To make back haul voyages more profitable the ship hauls gypsum and other products, but rarely grain. Salt is very destructive, and despite lining the holds with special composites, the cargo does take its toll, and cleaning for grain handling must be hard work. It did deliver grain here in Septmber 2011. 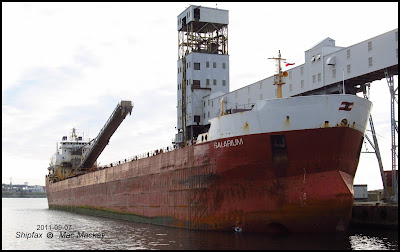 At first Salarium did carry some grain cargoes, but has not done so for some time.

Renamed Salarium (the word describes "payment in salt", from which the word salary derives) [I used to be paid peanuts, now I just get the salt] the ship commonly runs the St.Lawrence River and into the Seaway, with occasional forays as far as the Great Lakes. It has also loaded gypsum in Halifax from time to time. Once the Seaway closes for the winter the ship can be seen on the aforementioned Atlantic seaboard delivering road salt. 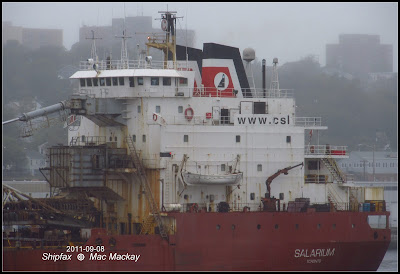 A Mines Saleines logo was added to the CSL funnel.
The battle against rust must be constant when carrying salt.


When Halifax Shipyard was in the repair business, Salarium was a refit customer, and looked quite splendid when it emerged with its fresh paint. 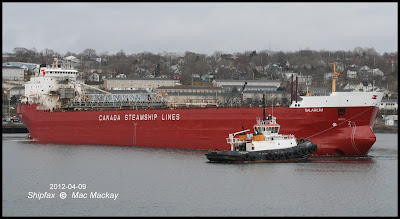 Now the ship generally works year round and only drydocks for its five year renewals. With a big one coming up in 2022, one has to wonder how much longer the ship will remain in service. 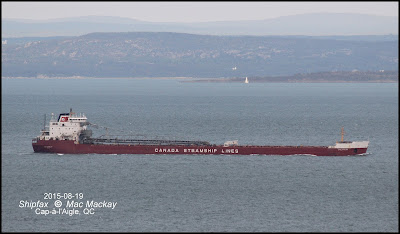 Plowing its usual furrow on the St.Lawrence, Salarium spends the summer supplying stockpiles of road salt for the coming winter.

Coastal Shipping's tanker Kitikmeot W. is due to sail this afternoon, and as speculated the ship has been reflagged to the Marshal Islands for winter trading internationally.

On January 1, Algonorth shifted from Imperial Oil dock 4 to anchor. Because Salarium was occupying the lower harbour anchorage, Algonorth went to Bedford Basin. The ship may just be waiting out weather or possibly will be there for a longer term. 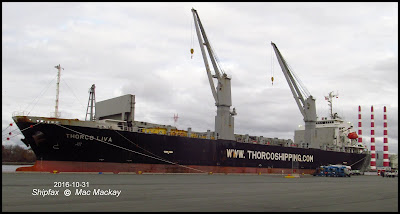 The general cargo ship Thorco Liva arrived this morning and tied up at pier 9c. This is the ship's third visit to Halifax. In October 2016 it was fitted with steel frames to carry fibreoptic cable. The prefabricated frames were loaded aboard and assembled here, and the ship loaded the cable in Newington, NH where it is manufactured. The ship returned to Halifax in January 2017, presumably loaded with cable, and anchored for nearly a month before sailing for Spain.