Algoma announced the purchase on March 21, and the ship was renamed Louise K under Tuvalu flag for the delivery trip. International Marine Service took charge of the ship and sailed it from Amsterdam to Halifax, sailing March 30.

The ship had been in port for only a few hours and workers were already painting over the old name and preparing to change the funnel markings and carryout other work to "Canadianize" the ship. 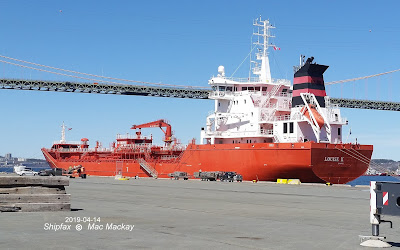 The new name is reliably reported to be Algoterra, but we will have to wait until it is actually painted on and the ship is registered to be certain.

As previously reported other Canadian companies such as McKeil and Desgagnés are also buying tankers on the used ship market.

Desgagnés latest, to be named Gaia Desgagnés has already sailed from Landskrona, Sweden and is due in Quebec April 21. It is the former Fure Vinga, built in 2018 by AVIC Dingheng, Yangshou and measures 12,770 gt, 17,999 dwt. It is a state of the art dual fuel, ice class ship.

UPDATE:
Algoterra it is. After painting over the old name, a crew in a bucket lift applied the new name using transfer letters. 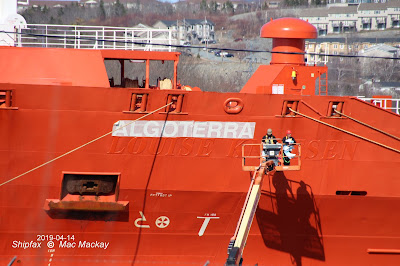 Further aft, staging was going up around the funnel to apply the Algoma colours and "Bear Spot", the company logo. 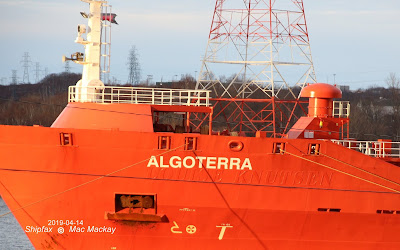 The Algoma company flag was also hoisted on the foremast. 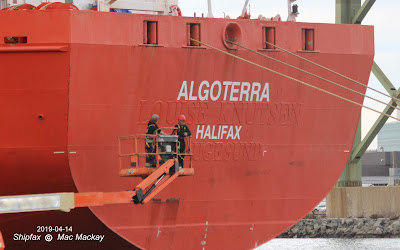 There is room to add "NS" to the port of registry line, since "Halifax" is not centered under "Algoterra"