Naval gazing and other views

Visiting naval craft have been rare in recent months but today was an opportunity to see two very different navy ships in Halifax.

It comes as a surprise to some to know that France has a naval presence in North America. The French department of St-Pierre et Miquelon off the south coast of Newfoundland is not just a group of small islands, but is also the centre of a 188 mile long, but only 10 1/2 mile wide Exclusive Economic Zone extending south out into the Atlantic Ocean.

As a consequence France maintains a patrol vessel, based in St-Pierre to police and enforce fisheries regulations in the area. The particular ship assigned to the role frequently visits Canadian mainland ports as a courtesy and Halifax is a regular port. 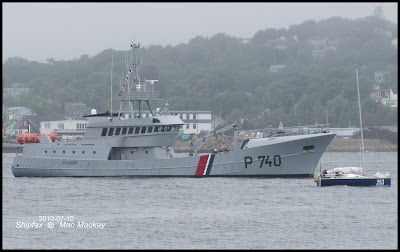 It has made many visits to Halifax, and is usually here every year to escort the annual St-Pierre sailing race. The chaotic start to the 2010 race resulted in part from the ship sailing without a pilot then maintaining radio silence. A close call with the inbound Essen Express could have turned out badly. 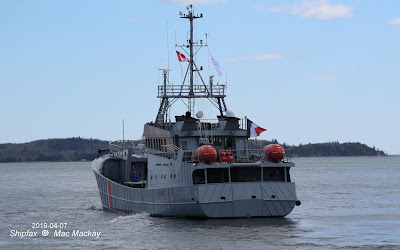 Sailing this afternoon, the ship was not displaying a pilot flag. However it did have a pilot this time.

It also has its periodic refits in Canadian shipyards. Previous refits were conducted in Lunenburg. In 2017 France entered into a four year contract with the Industrie Océan shipyard in Ile-aux-Coudres, QC for annual refits for the Fulmar in the autumn but also for emergency repairs (which it needed in May 2017). The contract applies to all French naval vessels in North American waters that may require repairs.


A very much  larger and more sophisticated warship tied up at HMC Dockyard this morning. USS Jason Dunham DDG-109 is one of the large class of Arleigh Burke destroyers. Based in Norfolk, VA the ship was built by Bath Iron Works in Maine in a very short space of time. Laid down in April 2008 it was launched in August 2009 and commissioned in November 2010. One can only hope that the production efficiencies that Bath has developed can be transferred to Halifax Shipyard when it comes time to replace Canada's frigates.

Tied up at Jetty NB with HMCS Ville de Québec in the background.


While not a naval vessel strictly speaking, USCG Cambpell WMEC 909 is also in town, but perched out on the end of a pier in HMC Dockyard and difficult to photograph. It is a Famous class medium endurance cutter, based at the US Navy's Portsmouth naval dockyard in Kittery, Maine. Launched in 1986 and commissioned in 1988, it has been extensively refitted and reconditioned. It has visited Halifax several times, as far back as January 2000. 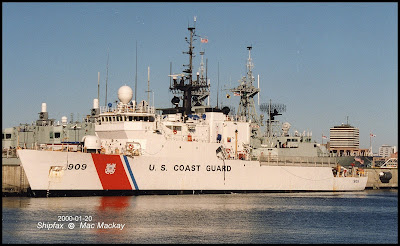 USCG Campbell at the same jetty with several ships in the background. Certain aspects of its appearance have changed since 2000.

As for commercial shipping, the general cargo ship BBC Brazil, which arrived at anchor yesterday, moved to Pier 9C this afternoon.

The 8059 gt, 10,872 dwt ship dates from 2011 when it was built by the Damen Yichang shipyard in China, and completed by the home yard in Gorinchem, Netherlands. Launched as Wenningstadt it was delivered as Thorco Copenhagen. It reverted to its original name in 2016 but was again renamed BBC Brazil. It became Ds Brazil January 1, 2018, but reverted to BBC Brazil January 1, 2019. The ship carries two 80 tonne cranes. 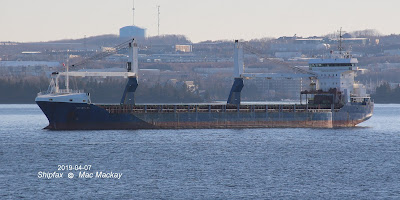 At anchor early this morning, the ship shows the hull sponsons square off the main cargo holds into box shapes.
Tomorrow, fleet mate BBC California is due to berth alongside the ship at Pier 9C. Perhaps it will use its pair of 180 tonne cranes to make some sort of cargo transfer. Built in 2008 by Jiangdong, Wuhu, it was first named Beluga Fraternity. When Beluga failed, it became Fraternity briefly in 2011 before becoming BBC California later the same year. It measures 9611 gt and 12,672 dwt.