It sounded like a bit of plate tectonics at Pier 9C today when BBC California drew alongside BBC Brazil. As reported yesterday some sort of cargo shift was expected between the two ships berthed together. 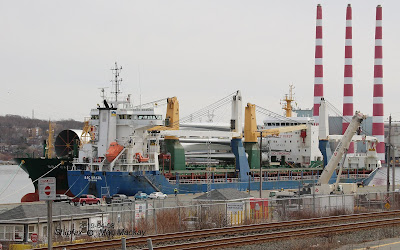 BBC California is carrying a deck load of wind turbines and blades, and during the day crews were successful in shifting one blade from California to Brazil. Original pilot orders for this evening were cancelled, so it is apparent that more blades are to be shifted, and work continues this evening.

Inclement weather in the form of snow descended on the ships late this afternoon, precluding further photography. With 15cm or more of snow and moderately high winds in the forecast, cargo work may be  hampered.