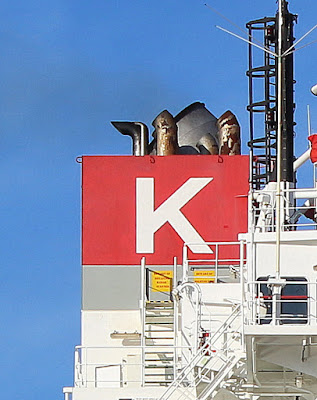 On April 5, 2019 the Japanese shipping company K-Line celebrated its one hundredth birthday. Officially named Kawasaki Kisen Kaisha, Ltd, K-Line is a major player in the world's bulk trades, and a 31% partner in the 240 ship container line Ocean Network Express [ONE], with two of its once bitter rivals, MOL and NYK.

Its early history has some eerie similarities to Canadian ship building history, but K-Line has survived to reach the century milestone.

Kawasaki Dockyard Co, which traced its roots to 1874, was caught up in Japan's expansionist plans during World War I. A British ally since 1902, Japan joined the war against Germany, with the hope of expanding its influence in China. It seized German territories in the Pacific while Germany was distracted by the hostilities in Europe, and assisted in the war effort by ridding the far east sea lanes of German raiders. Japan saw itself as becoming the dominant economic and political force in the region.

With the the huge loss of ships due to unrestricted naval warfare, Kawasaki took a chance on increasing its shipbuilding business. They began to build ships on spec, to meet the hoped for increase in trade following the war. However they misjudged the timing and when the war ended earlier than they expected, they were stuck with a number of ships.

Canada's government thought it saw a similar opportunity and set up shipbuilding operations all over eastern Canada, including Halifax Shipyards, and built a whole fleet of ships to meet an anticipated post-war need. Most were not ordered until 1918 and when completed, times had changed.

When World War I drew to a close with the armistice of November 11, 1918, recovery was slow and  there was in fact a glut of ships and shipping rates plunged dramatically. Kawasaki decided to form its own shipping company to make use of the ships it had built and thus KKK was founded.

Canada on the other hand formed a government owned shipping line, took delivery of ships that were built at premium prices, but were of obsolete design, and continued to take delivery of ships that were still under construction when war ended. The Canadian Government Merchant Marine lost millions, eventually sold off its ships at below cost and was forced to close down.

Despite the poor market conditions, K-Line found a way to survive and gradually built up and expanded their fleet. In the 1930s it was in the top 15 world shipping lines. Japan was on the wrong side in World War II and K-Line lost 56 ships. With their 12 remaining ships they rebuilt the business, including the merger with Iino Kisen in the 1960s.  They were pioneers in purpose built auto carriers in 1971 and expanded into terminal ownership, logistics and the offshore. 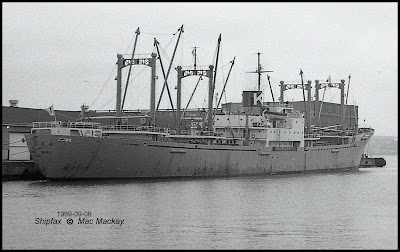 K-Line's Bolivia Maru berthed stern in at pier 23 in 1969. The 8176 gt, 10,618 dwt ship was built in 1960 by Osaka Zosensho, and powered by a 6 cylinder MAN engine, built under license by parent company Kawasaki Dockyard Co. It had refrigerated cargo capacity and was a regular caller in Halifax.  It was a traditional engines amidships, six hold cargo ship with its own cargo handling gear. 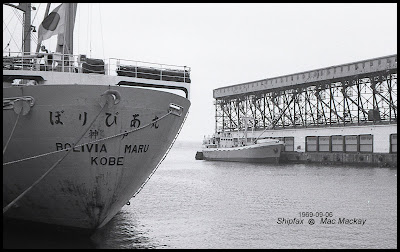 Bolivia Maru was sold in 1977, and sailed as Fides Progress under Singapore flag until arriving at Gadani Beach, Pakistan for scrapping in January 1981.
The coaster OK Service XI is berthed across the camber at pier 25. Note the grain galleries extending to the end of the pier. The grain loading capability was later moved to pier 28.

K-Line made the transition to containers in the 1970s and 1980s, and thrived until the current drive to consolidate shipping companies and build giant ships placed huge demands on capital. In order to maintain a place among the world's giant companies, the three principal Japanese container lines decided in 2017 to merge. It remains to be seen if ONE can turn profitable (they say they will next year) but each of the partners is experiencing huge losses to start. 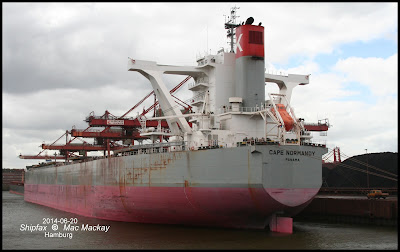 The bulker Cape Normandy at 92,379 gt, 180,646 dwt is too big for the Suez and Panama canals, and is thus classed as "Capesize". Built in 2012 by Tsuneishi Cebu in the Philippines it is typical of K-Lines bulker fleet, built to carry ore, and in this case coal.
Its current fleet consists of 93 bulk carriers, 11 tankers, 13 LNG tankers, 6 LPG tankers, 56 auto carriers and 7 OSVs. It also has one small container ship left after ceding its fleet of 60 box boats to the Ocean Network Express.

Asian Highway, built in 1978 was one of the early auto carriers, with a capacity of 4700 cars. It was scrapped in Chittagong, Bangladesh in 2009.

K-Lines auto carriers now sport a colour scheme that repeats their funnel mark and replaces the (boring) all gray hull they used in recent years.

Kentucky Highway built in 1987 wore the old colour scheme until broken up in Aliaga, Turkey in April 2016.

Life has not always been rosy for K-Line, and it faces stiff competition in all its business lines. ONE has had a rocky start and that has not helped the company's bottom line.

History unfortunately rarely plays a part in the success of shipping companies. Supply and demand economics and changing trade patterns outweigh past successes. We have seen many famous and long-lived names go down in flames or get swallowed up in mergers in recent years, but K-Line exhibits a certain determination in its management culture that probably bodes well for it.