Back to work - for some 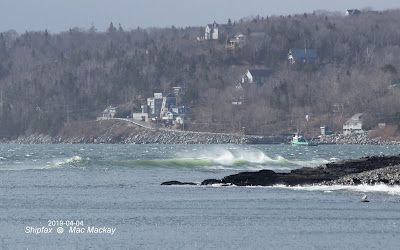 After several days of tempestuous weather it was back to work for some harbour activity. High winds created rough conditions - too rough for dredging off Halterm - and that work has been suspended since Wednesday. It has not resumed today, and presumably will not be on again until Monday. Some set up work on shore has begun at pier 9C where the concrete caissons will be fabricated.

There were very few ship arrivals and departures over the past several days, and I am not aware that pilotage operations were actually suspended. The auto carrier Morning Conductor was held in port and required a tug to keep it alongside Autoport on Wednesday. It sailed Thursday.

HMCS Fredericton has been in and out of harbour over the past several days and today moved with tug assistance from anchorage in Bedford Basin to HMC Dockyard. 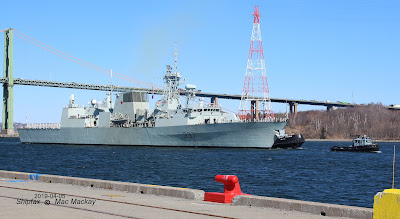 Tugs Listerville and Glenbrook assist Fredericton through the Narrows to the Dockyard.

The Coast Guard rescue boats were carrying out their usual spring training this week for Coast Guard College students. They had some real rough weather experience before taking up their summer duties in several ports around the region.

The harbour hopper amphibians were doing their Transport Canada trials today. Harbour Hoppers1, 3, 5 and 6 all took brief dips in the harbour. 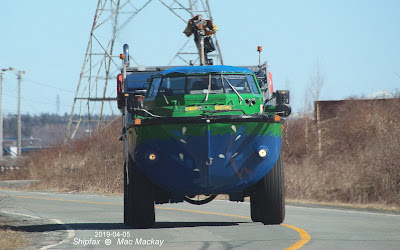 Harbour Hopper 1 was the first of four amphibians to do its spring swims.

The pilot boat Nova Pilot was also trialing and did a simulated disembarkation with Jennifer Schepers.

And there were signs that the former CCG ship Matthew is coming back to life. Dominion Diving's Dominion Bearcat was alongside today with divers in the water, and a crane was set up on shore. The ship was recently sold to Newfoundland owners and re-registered as Miss MJ. It has been laid up since 2012, so it will take a lot of work to get it going again. 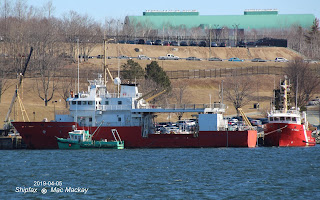 Dominion Bearcat with divers in the water alongside Miss MJ at BIO. CCGS M.Perley (right) is also coming out of layup.