A ship that was a sometime caller in Halifax is now advertised for sale by Federal Court order.  Ethan, registered in the unlikely port of Zanzibar has been idle in Quebec City since 2015. 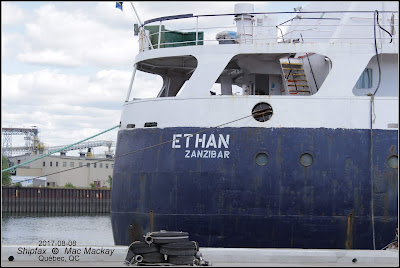 The ship was built in 1975 by Collingwood Shipyard for N.M.Paterson & Sons Ltd of Thunder Bay, ON as Ontadoc. It was a bulk carrier of 4488 gt, 7405 dwt intended for trade to smaller ports and occasional overseas work. The ship was one of six similar vessels built in pairs.
Initially it had no cargo handling gear to serve its four hatches, but two cranes were fitted in 1989 to facilitate unloading on northern supply trips. It then became a general cargo ship too.

In 1990 Transport Desgagnés purchased the ship and renamed its Melissa Desgagnés. In 2001 it made one of its rare appearances in Halifax in tow of Magdalen Sea from the area of Port aux Basques where it presumably had been aground. The next day, July 23, it entered the Novadock at Halifax Shipyard where its rudder, prop and shaft were removed. New shell work was visible on the port side just forward of amidships, but there was likely bottom work too. The ship exited the drydock August 17 (minus prop and rudder)and lay alongside pier 6 until April 23, 2002 when it entered the Graving dock for completion of repairs. It emerged May 24 and sailed for Pugwash May 27 to load salt. 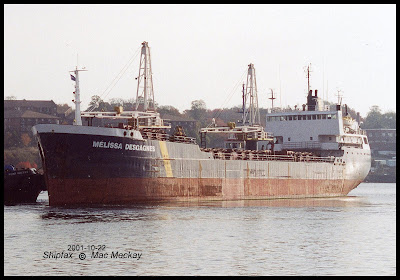 In 2015 the ship was laid up in Quebec City and sold, with Canadian registration closing July 21, 2016. Renamed Ethan and flying the flag of Tanzania, the ship remained in Quebec City over disputed payment. The ship lost its classification by Lloyds in 2017 and was arrested in January 2017. It shifted around from berth to berth with court permission piling up costs for towing, berthing, repairs, agency, etc., 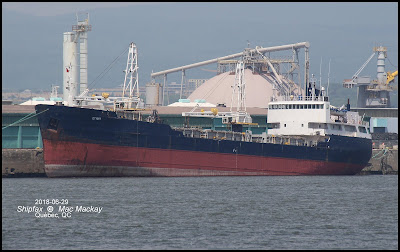 Finally on April 2 the Federal Courts ordered the ship to be sold, free and clear, as is where is. The submission date for bids is May 1, 2019 with the sale closing June 28, 2019.

This ship's nearest sister ship Amélia Desgagnés ex Soodoc was sold in June 2017, and renamed Amelia. Under the flag of Micronesia (port of registry Malakal) it sailed directly for Aliaga, Turkey where it was beached August 17 and broken up.