The Columbus JAX service was initially named for its connection between Jakarta, Indonesia and Los Angeles, but it is virtually a round the world operation using 18 ships on a 118 day rotation, thereby making weekly calls at a bewildering array of ports.

The line's Halifax calls, usually on Saturday have been adjusted recently when a new ship was inserted in the rotation and all the other ships were moved one week later. This has caused some irregularity in arrival times. There was no call Easter weekend. That meant one ship called on Friday-Saturday (CMA CGM Ivanhoe) last week-end and another yesterday and today (CMA CGM Fidelio).

At 349 meters long, it is hard to get a sidelong view of the ship without resorting to a wide angle lens. After its first North American call, the ship is still well loaded.

Although not giant ships, they are certainly big at 9415 TEU and take a long time to work with Halterm's current facilities where sometimes only two cranes are available if other ships are in port at the same time. Having two of these ships in such a short spell also puts pressure on the storage areas and rail service.

The situation will only become worse if larger ships are added.

The great advantage to Halifax (and Canada) is that we are the first port of call from Asia thus expediting imports to Canada. A lot of the cargo that comes off these ships is destined to the US mid-west too, and Canada effectively "piggy backs" on that traffic.

Dredging continues off the south end of pier 42, as CGA CGM Fidelio gets underway. The scale of these largish ships gives an idea of how much longer the pier will have to be to host two at a time.

Halterm expansion is certainly on the front burner, and current operators Macquarie Infrastructure Partners have apparently finalized a sale to an as yet unidentified buyer, but believed to be PSA International, a wholly owned subsidiary of the PSA Corporation. Formed in 1997 when the Port of Singapore Authority was privatized, the company has interests in many lines of business including tug operations and ships, but is primarily known as a leading terminal operator. (The parent of PSAI, Temasek, were the previous owners of APL's parent NOL - see above)

Mcquarie on the other hand is also an important terminal operator. Coincident with the sale of Halterm they have announced the acquisition of the former OOCL Long Beach container terminal for a cool $1.87 bn (US). US authorities required OOCL divest the terminal as part of approval process for the takeover by COSCO. 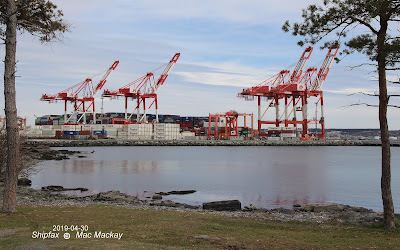