A barge, built in 2015 by Aecon Atlantic Industrial Inc in Pictou, NS to carry the Cape Sharp tidal turbine has been ordered for sale by the Federal Court. Tied up in Saint John, NB since lowering the turbine into the fast flowing waters of the Minas Passage (twice), the barge is heavily in debt to a variety of service providers.

Open Hydro Technolgy Canada Ltd, owners of the barge, have been declared insolvent and there was no other way for the creditors to recover some of their overdue bills except to apply to the Federal Court to have it sold.

The turbine was first lowered into the Bay of Fundy  in November 2016 but was raised in June 2017 after it malfunctioned. It took until July 2018 to repair then reposition the turbine again on the seabed. Shortly after that Open Hydro Technologies parent company in Ireland and its Canadian branch were forced into bankruptcy when its major shareholder Naval Energies withdrew financial support.

A separate outfit called Cape Sharp Tidal, owned by 80% by Open Hydro and 20% by Emera (parent company of Nova Scotia Powder, the electrical utility in Nova Scotia)  actually owned the turbine. However Emera withdrew when Open Hydro went into bankruptcy.

In September 2018 the turbine stopped working again and has been sitting on the bottom ever since, not living up to its expected production of 2MW of electricity.

The sophisticated barge measures 1282 gt, and consists of two hulls bridged in two places, forming a uU shaped well. A winching system holds the turbine in position for transport and can lower or raise it from the slot between the two hulls. The cost to build the barge was reported to be $30mn in 2016. 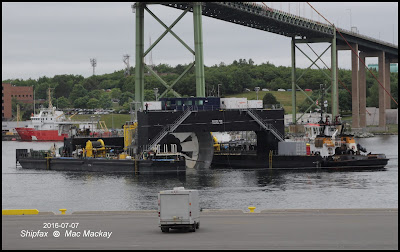 En route from Pictou to Saint John in July 2017, the barge, with the turbine slung between the two hulls, made a stopover in Halifax.

There were initially several creditors with charges against the barge, but RMI Marine, claiming $444,719 forced the sale. Others interested are believed to be DP World (terminal operators in Saint John where the barge is tied up), Atlantic Towing Ltd, and several other service providers in Saint John.

An ad appeared in the Halifax newspaper The Chronicle Herald on April 12 giving two weeks for filing claims. Interestingly instead of naming a local sheriff  the ad gives British ship brokers Marint (Offshore Services) Ltd as the point of contact, with an e-mail address and a London telephone number.

The Province of Nova Scotia apparently holds a bond of $1.2 mn against the turbine, and on April 3, 2019 ordered its removal for failure to comply with the terms of its license (insolvency being one of several violations).

It would likely be possible to recover the turbine using conventional salvage methods, but it would likley  be easier if the barge were available. There is little doubt that the bond is insufficient to pay for recovery, some say it would be twice that at least.