Most ships that come to Halifax these days are repeat callers. Even if it has been some time since they were here last, they are familiar to varying degrees. Today however there were three two first time callers to to see.

Arriving over night at Irving Woodside, the tanker Elka Glory is, as usual, coming from Irving Oil's bleanding terminal in Amsterdam. It was anchored off Halifax yesterday, then moved to anchor inside the harbour. It then waited  for Irving's Acadian to sail early this morning before moving alongside. 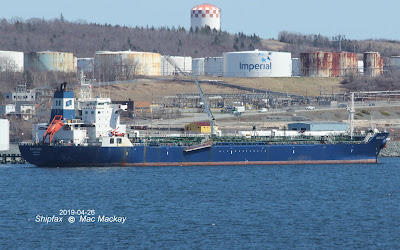 Due to the angle of the photo, it is Imperial Oil's tanks that show in the background, even if the ship is tied up at Irving's Woodside terminal.
The ubiquity of the Irving name however is safe, thanks to a Midland Transport truck on Pleasant Street. (Midland is owned by the other side of the Irving family from Irving Oil, namely J.D. Irving.)


Elka Glory is a member of the European Product Carriers fleet of "Elka" ships. It came from the Brodosplit shipyard in Split Croatia in 2008 and measures 27,612 gt, 44,598 dwt.

Oddly another Croatian built tanker arrived this afternoon. Brodotrogir of Trogir, built the NS Spirit in 2006. 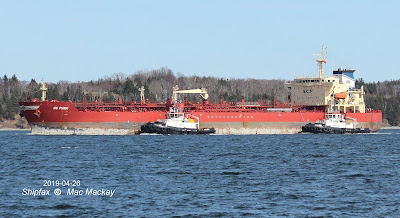 The third second "new to us" ship is  JSP Levante, owned by a German investment syndicate and registered in Antigua and Barbuda with Jebsen Shipping Partners as managers. It was built in 2006 by Kouan Shipbuilding Industry in Taizhou, China. The 9957 gt, 13,634 dwt ship is a CV1110+ type feeder container vessel with a capacity of 1118 TEU. It carries a pair of 45 tonne SWL cranes. 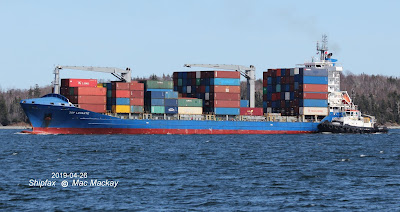 The tug Atlantic Oak is positioned near the ship's stern to swing it around for backing in at pier 31.

This is a new ship to Melfi Marines regular service between Europe and Cuba. It is on the return leg of the trip, and as usual the ship has a load of nickel sulfides in bags, which it will unload here. There are no containers stacked on hold number seven of the ship's eight holds, to allow the bags to be craned out.