There are more changes coming in the Canadian short sea shipping business, with several sales and purchases either completed or in the offing.

After listing two of its ships for sale, I hear that they have now been sold and replacements are coming in time for this year's supply runs.

Avataq and Umiavut were built in the late 1980s and there have been issues with their reliability recently. 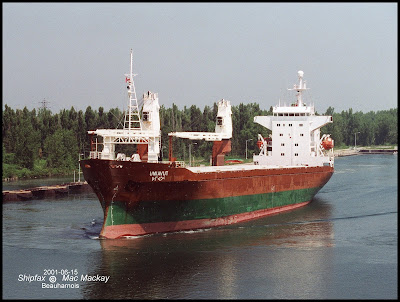 Umiavut upbound in the St.Lawrence Seaway for Valleyfield, one of its usual loading ports for northern supply.


Avataq was built by Miho Shipyard in Shimizu, Japan as  Poleca and carried the names 89: Mekhanik Volkosh, 91: Tiger Speed, 92: Mekhanik Volkosh, 92: Lootsgracht, when it was acquired by the Dutch company Spliethoff's . In 2007 Transport Inukshuk Inc at first chartered, then purchased the ship and renamed it Avataq. It has carried out summer supply ever since.
Although it has never called in Halifax it was drydocked in Shelburne in 2012.

For several years it reverted to Netherlands flag for winter work for Spliethoff's but that ended in 2011. The 6037 gt, 9588 dwt ship carries two cranes

Umiavut dates from 1988 from the same shipyard, and was built as Newca, but renamed Kapitan Silin on delivery. In 1992 it was acquired by Spliethoff's and renamed Lindengracht. Umialarik Transportation Inc acquired the ship in 2000. It measures 6037 gt, 9653 dwt and also carries two cranes. From 2000 to 2011 it was usually chartered back to Spliethoff's in the "off season" November to June and sailed under the Netherlands flag.
Last August 12 it ran aground in Lac-St-Pierre while returning from northern supply and had to be lightered off in a four day operation before it could be refloated. 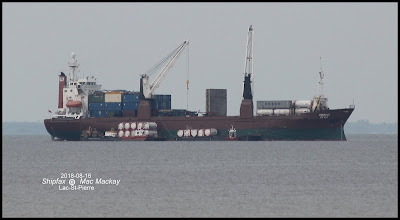 Umiavut was able to use its own lighterage barges and tugs to offload empty propane cargo tanks and other cargo after it grounded last summer.

It is understood that replacement ships have been acquired from Spliethoff's "E-class". These are 12,750 dwt ships equipped with three 60 tonne cranes. They are sister ships to the former Edisongracht, now Qamutik in the NEAS fleet since 2008. 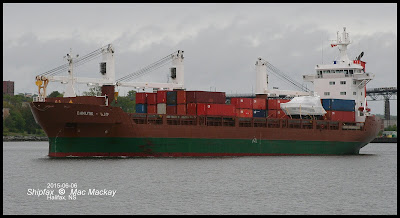 The E-class Qamutik in Halifax in 2015 while still on winter charter to Spliethoff's.


McKeil Marine Ltd is expanding its dry-bulk fleet, and getting into the tanker business. Long a tugboat and barge operator, in recent years it has acquired small bulk  carriers fitted to carry cement and other cargoes. It has just been announced that they are acquiring another ship, similar to the two already in its fleet. The new ship is due in Canada from Italy in May. 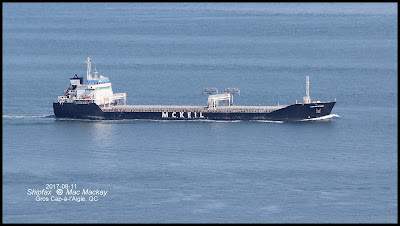 Evans Spirit is one of two similar ships in the current McKeil fleet.

All three ships will be renamed by McKeil before entering into service under Canadian flag.

It is encouraging to see Canadian shipowners investing in ships rather than relying on chartered in foreign tonnage under coasting licenses.