After a remarkably quick "Canadianization" the tanker Algoterra sailed this afternoon to take up its new duties. It had only arrived on Sunday April 14, and in less than a week it had made all the needed changes.


First order of business after getting away from the dock today was a compass swing in Bedford Basin. (I noticed a lot of welding going on around her main mast, above the bridge, which likely played havoc with the ship's magnetic field.) 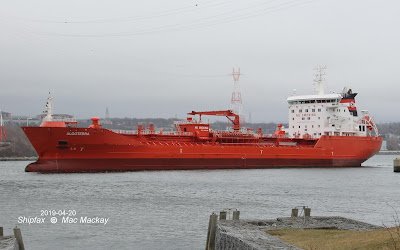 Away from the berth, bound for Bedford Basin. 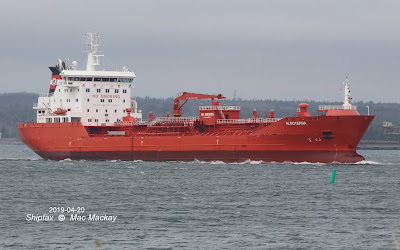 Countering a stiff nor'west breeze, making for the Narrrows outbound.

Once that operation was completed, the ship was outbound for Montreal, giving an ETA of mid-day April 23.

The pilot ladder is rigged to disembark the compass adjustor to the launch Halmar in the lower harbour. The pilot will be aboard for another hour until they reach the pilot station.

Algoma Tankers Ltd have their entire tanker fleet "booked" for the navigation season according to information from Algoma. There may still be a need for some coasting licenses for foreign tankers, but so far Algoma seems to be getting along without, except for one short term trip for a US flag tug and barge.