Write if you find work

It think it is time for a letter from the Lomur. After a short tenure with Eimskip, the ship arrived in Halifax April 12 and anchored in Bedford Basin. Original schedules showed Lomur with a longer term charter with Eimskip, but perhaps all the storm damage incurred to ship and cargo in March convinced someone that the ship was not suitable for the type of work, and cut the deal short. 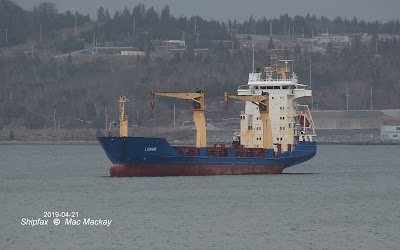 It now appears that the ship has been fixed for work with Transport St-Pierre International (TSMI) for at least a few trips. Lomur will move from anchor to Cerescorp Friday morning to load, departing later in the day.


TMSI also serves Argentia, NL but Lomur will be unable to do that as a foreign flag vessel, so it will only run between Halifax and St-Pierre. As for lack of RoRo capability, TSMI has recently taken delivery of a number of flat rack 53 foot containers containers, which should accommodate most RoRo items such as cars. TSMI and Oceanex are among the very few container lines in the world to carry 53 foot containers to sea. Both companies operate ships that do not have celluar holds, which limit the size of containers. 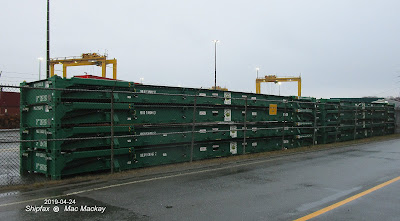 TMSI's brand new 53 foot flat racks await work at Cerescorp.
(They carry reporting mark "MMJ")
The regular TMSI ship Nolhan Ava is in Freeport, Bahamas for reft. Is there a small chance that it will handle some of the Halifax bound cargo from Yantian Express that has been stuck in Freeport for months?