After transferring some of the deck cargo of wind blades from BBC California, [see previous posts] BBC Brazil sailed this morning for  Montreal. Since the California must pass Montreal en route to its destination of Ogdensburg, NY, there must be a reasonable explanation as to why the transfer was necessary. 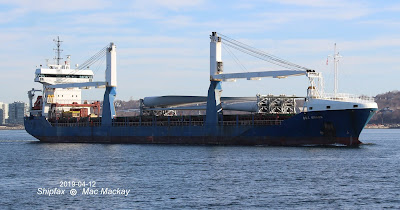 BBC Brazil has several interesting features, including the turtle deck over the bow and the full width enclosed bridge. It is certainly lightly loaded if it has only three blades on deck.

A new to Halifax autocarrier arrived at Autoport this morning then shifted to Pier 31 this afternoon. I doubt that that there any connection between owners Wilhelmsen Lines and Tulane University in New Orleans, but the choice of name shows the variety available when the fleet standard is to name ships beginning with the letter "T".

With Atlantic Willow (bow) and Atlantic Bear (stern) the Tulane turns to back into Pier 31.

Arriving in Bedford Basin is the small container ship Lomur. The ship had been on a charter to Eimskip and was scheduled to continue calling in Halifax until at least May. However it has now been replaced by another ship.


That new ship, called Pictor J has already started work for Eimskip, but will not be calling in Halifax until May. Eimskip's ship rotation has been juggled somewhat as a result of the new ship.
Lomur was battered by a storm on its way from Iceland to Argentia, NL in March and there was damage to several containers and to the ship itself. See previous post: