A couple of dry days allowed painters to get to work on two ships in Halifax.

Acadia Desgagnés, has removed Bridgetown and applied St.John's as its port of registry and as of today returned to Canadian registry. They have not found the Canadian flag in the flag locker yet, so the Barbados flag still flies astern. 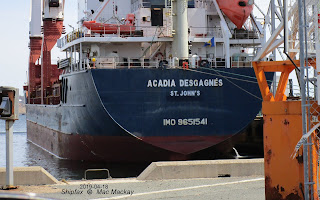 The owners could save on repainting if they would register the ship in Antigua, where the port of registry is also St.John's. Unfortunately Bridgetown, Nova Scotia is no longer a port of registry. It certainly would be closer to Acadia than St.John's.


Algoterra now carries the Algoma Central Corporation disc on its funnel, complete with the famous bear. The funnel itself has been repainted to Algoma colours, whereas the disc is shop made and was installed by crane. 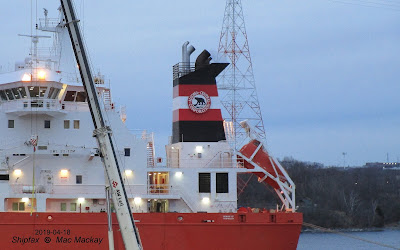