The port of Halifax was business as usual but busier than usual today with something happening in most sectors of the port.

Viewable in its entiretly only from across the harbour, CMA CGM Musca takes up a good piece of Halterm's pier 41-42  face.


It is the first time in Halifax for this ship, built in 2009 by Daewoo, Okpo. Its impressive stats are 128,600 gt, 131,830 dwt and the (all important) container count of 10,980 TEU, including 700 reefers. The Port of Halifax is counting on ships of this size and larger to come to Halifax, thus justifying huge and disruptive expansions to its container handling capabilities.

Assuming the cranes are in the same position as in the previous photo, about 1/4 of the ship is not visible in this view.
The fact remains that this particular route can apparently operate well with 9500 TEU ships. But every once in a while they must send bigger ships to take away empty containers that are clogging up terminals due to lack of export cargo. The trade imbalance with the Far East is such that we import far more containerized cargo than we export. Shipment of raw materials, such as grian, ore, and forest products narrow the gap somewhat, but finished goods are way out of balance.


Hoegh Brasilia arrived in the morning but had to undergo a Canadian Food Inspection Agency  inspection for Asian Gypsy moth larva before it could dock.

Halmar takes the pilot off Hoegh Brasilia while it undergoes inspection at number one anchorage in the lower harbour.


That procedure took only an hour or so, and it was then able to move to Autoport. Built in 2007 by Tsuneishi Cebu in the Philippines, the ship is owned by Chijin Shipping and managed by Kambura Kisen Co Ltd. It is on long term charter to Hoegh and  is registered in Panama.

Once cleared by the inspectors, the ship took another pilot and a pair of tugs then headed for Autport. That is Tulane in the background at pier 31.

It was not the only autocarrier in port . Wilhelnmsen's Tulane (see yesterday) was at pier 31 unloading RoRo cargo which included a couple of shrink wrapped helicopters as well as wheeled machinery for farm, forestry and mining. (Another trade imbalance).

Another ship made only a brief call in Halifax. The tanker Silver Venus en route from New York to Come-by-Chance in ballast anchored for about an hour before it sailed. No reason was given for this short stay but it was likely another AGM inspection. 'Tis the season.

An entirely typical product of Hyundao, Mipo in 2015, it measures 29,327 gt, 49,635 dwt. It appears to be still under Korean ownership, but registered in the Marshall Islands to the cryptically named Silver No.29 SA. Management has been entrusted to Sinokor Maritime Co Ltd.  Sinokor (Sino=China, Kor=Korea) operates container ships and cargo handling concentrating on trade between the two countries. It also has a fleet of bulkers and tankers trading world wide.

Up in the Narrows it was time for the BBC News. (Two BBC ships sailed in the last two days - see previous posts.)
Today's arrival was BBC Kwiatkowski 6155 gt, 7732 dwt multi-purpose carrier with two 120 tonne cranes. It won't be doing any heavy lifts while it is here, but instead will load steel frames to carry fibreoptic cable.

Several prefabricated frames wait on truck trailers, to be loaded aboard the ship using its own cranes.

The ship was launched in 2008 as Eugeniusz Kwiatkowski, but renamed on delivery. The ship 's hull was built by Polocna shipyard and finished by Remontowa, both in Gdansk. It was last here in January 2014 (in a blizzard) with project cargo that it unloaded at Woodside. This time it anchored off port on April 7 and waited for its fleet mates to clear before coming in today.

The Cerescorp terminal in Fairview Cove was also a busy spot with the 6402 TEU Dimitra C alongside until late afternoon. The former Priority -81, MOL Priority-14 dates from 2002 when it was built by IHI, Kure. At 74,071gt, 74,453 dwt it is among the largest conventional container ships that call at the pier. 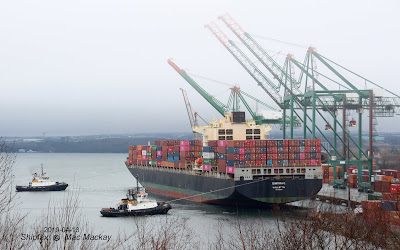 Tugs are pulling Dimitra C off the pier.Atlantic Willow, on the bow will go to assist the next inbound, and Atlantic Fir on the stern, will stay with the ship as stern tethered escort through the Narrows.

The largest ships to call at Cerescorp are the ACL container /RoRos. Today's arrival was Atlantic Sun built in 2016 and totalling 100,436 gt, 56,700 dwt. Built by Hudong-Zhonghua, Shanghai, it and its four sister ships have had more than their share of teething troubles, and in fact Atlantic Sail has been in dryock in Hamburg since April 10 for unspecified issues and is missing at least one rotation trip.

Taken a few minutes prior to the photo above,, Atlantic Willow plunges past Atlantic Sun as it strides up the Narrows with Atlantic Oak on the stern.

Atlantic Sun is eastbound, but its westbound counterpart, Atlantic Sky, which was in on Wednesday brought a variety of RoRo cargo including many army trucks, an aircraft fuselage and a tail section: 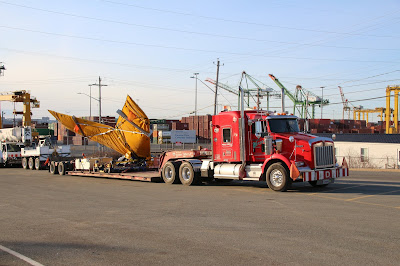 About the only place in Halifax Harbour that did not look busy today was the Bedford Institute. CCGS Cape Roger sailed at some point and CCGS Sir William Alexander arrived late evening. However the pier looked quite bare earlier this week. (photo taken Thursday)

Something is missing! Indeed the former CCGS Matthew is gone. I believe it was towed out by Dominion Victory earlier in the week for North Sydney where it will get a serious going over. Renamed Miss MJ it was acquired by Newfoundland owners, based in Goose Bay.