Believe it or not cruise season has begun again. Despite predictions of 15 to 20 cm of snow later today, hardy tourists emerged from Marina at pier 31 to see the sights. The ship did not dock at pier 22, the normal cruise ship berth, since the cruise pavilion and its merchants, are not open for business yet this year.

The snow did not set in until the afrernoon and then it was very fine and wet. However visibility was quite limited when the ship sailed at 1830. According to news reports passengers had been warned to expect cold and snow, so seemed unfazed by the experience. 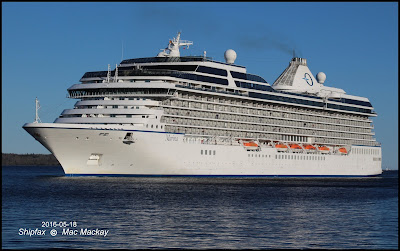 Marina under more clement conditions in May 2016.

After last year's experience they will not try the St.Lawrence River this year. Last May the ship had to berth in Trois-Rivières when high water levels prevented it from passing under the Laviolette bridge. A thousand passengers were bused to and from Montreal.

The ship was in Saint John, NB on Sunday where the passengers would have enjoyed real spring weather.

Built in 2011 by Fincantieri Sestri Ponente, Genoa, the 66,084 gt ship has a maximum passenger capacity of 1300. The cruise schedule indicates it may have 1250 on board for this trip. The ship is en route from New York for operators Oceania Cruises Inc  (a brand owned by NCL Norwegian). It has planned stopovers in St.John's, Cobh, Dublin, St-Malo and Le Havre, before arriving in Southampton, UK April 19. After that it will go on to France, Portugal, Spain and Morocco.

Update
Although the next port was to be St.John's, NL that visit has been cancelled. The winter weather would be chasing the ship and I assume that is the reason. The ship is sailing directly for Cobh, Ireland instead.