What little tanker traffic we have nowadays is usually limited to MidRange type product tankers for Irving Oil or Imperial Oil, bringing in refined product for local distribution.
Imperial's winter shuttle from Lévis using the Algonorth has stopped with the opening of the St.Lawrence Seaway. The ship is now in the Great Lakes headed for Sarnia.

Occasionally another tanker drops in and today there are two such vessels in port.

Arriving this afternoon was Swan Biscay, tying up at pier 27. It will not be loading or unloading cargo, as this appears to be a pit stop for fuel delivered by truck.

Built by Torlak in Tuzla, Turkey in 2008 the ship was originally called Ozay- 6 for a variety of Turkish owners until 2014  when it was acquired by the current owners, identified only as Swan Biscay LLC.  Management is by Norstar from Singapore, with offices in Westport, CT, and the ship is registered in the Marshall Islands.
The 8198 gt, 11,530 dwt ship has a "turtle back' over the forepeak, somewhat unusual in tankers, but in view of the very low freeboard, quite sensible. The ship is en route from New Orleans to Port Alfred (La Baie), QC, so is likely carrying some chemicals for the aluminum industry.
The ship works generally in the Atlantic Basin and Gulf of Mexico, although it did enter the Great Lakes in 2015.

The other tanker is in fact an articulated tug barge combination,. Leo A. McArthur (tug) and John J. Carrick (barge) operate for McAsphalt Marine Transportation Ltd and arrived at the newly refurbished McAshpalt dock in Eastern Passage on April 9. The pair were among the early vessels to exit the Great Lakes when the Seaway opened for the season. Despite being held up by ice in Lake Erie and Lake Ontario for several days, they cleared the Seaway on March 31. 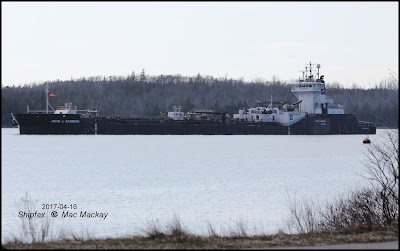 It has become the norm for the pair to arrive in Halifax in early spring as the first visitors from the Great Lakes.

Purpose built in China in 2007 to carry asphalt (which must be kept heated) the barge has a gross tonnage of 6916 tons and a capacity of 80,000 bbls. It is double hulled and ice strengthened.. The tug remains connected to the barge at all times, even while travelling to Saint John, NB and Newfoundland.
The tug was named Victorious when built, but was renamed in 2017 to recognize one of the co-founders of McAsphalt along with John. J. Carrick.