The end of the workday usually results in a build up of harbour traffic. Hardly a rush hour really, but usually a good time to do some shipwatching in a short period of time.

Today's miniature rush hour saw two departures and an in-harbour move all happening with a few minutes of each other. Before those however the pilot boat set out for the station. 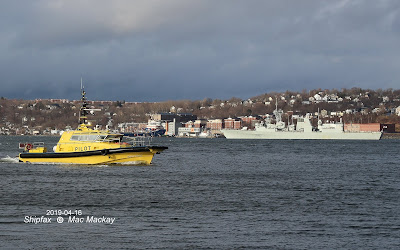 Outbound ahead of the departures, Scotia Pilot catches a sunbeam as does HMCS Ville de Québec at anchor.

The container ship Budapest Bridge sailed from Cerescorp's Fairview Cove container terminal at 1700 but it was a full hour before the ship arrived in the lower harbour. 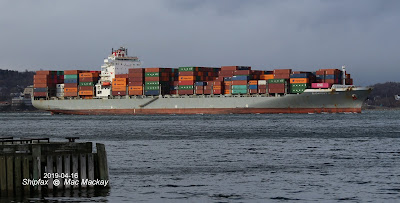 The sun was disappearing again as the ship made its way outbound.

As soon as the big ship was clear, Trinity Sea moved from the Exxon Mobil dock in Dartmouth to pier 27 in Halifax. This seems to be a popular layby berth for offshore suppliers. They don't usually load or unload there, but could take fuel if the Irving Oil terminal is occupied, as it was today with Irving Oil's East Coast. 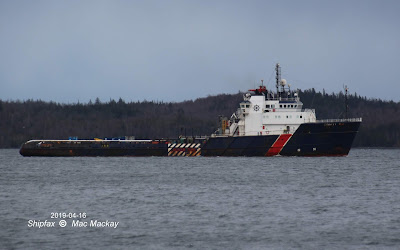 A very dark squall chased the vessel across the harbour.


Horizon Star followed, heading for sea trials. The big offshore craft has been idle at the Cove in Dartmouth, since January 25 when it returned from the Yantian Express salvage operation.That ship is still stuck in Freeport, Bahamas with no destination yet revealed to unload its un-damaged cargo. 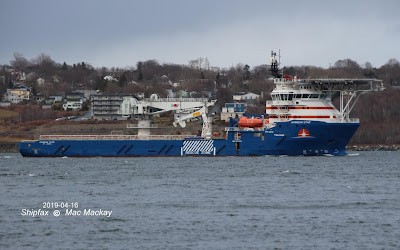 As the photos indicate the sun was in and out from behind clouds and rain squalls with gusty winds blew through every few minutes. Typical April weather.

Meanwhile dredging continues round the clock off pier 42. Two complete crews work 12 hour 7 to 7 shifts from  1900 Sunday night until Friday.

Yesterday the dredge Derrick #4 was enshrouded in fog  and looked like it was in outer space. 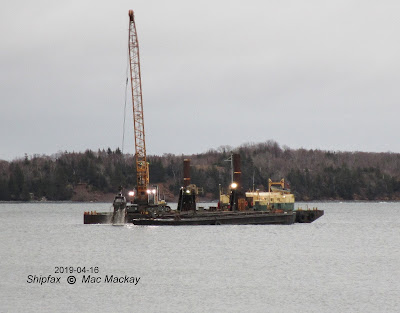 Note the water depth, from the height of the 70 foot spuds above the deck of the dredge.

There is still about three weeks of dredging left to do.