After three days at anchor outside, Acadia Desgagnés entered port and tied up at pier 25. The ship is still flying the Barbados flag and as it did last year it has come to Halifax to transfer back to Canadian flag.  The ship was acquired by Transport Desgagnés in 2017 and registered in St.John's, NL. It worked that summer and fall in Atlantic Canada then shifted to Barbados on January 1, 2018. 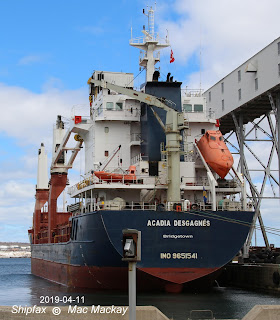 Last year it arrived in Halifax May 23 and returned to Canadian registry May 29. On January 1, 2019 it went back to Barbados flag on a charter arrangement for international work.
The ship was built in 2013 by Shantong Baibuting in Rongcheng, China as Sider Tis for Italian owners. Measuring 7875 gt and 10,396 dwt it carries a pair of 40 tonne cranes. Although ice classed it does not normally work on northern supply, but instead works around the Gulf of St.Lawrence and into the Se3way will bulk cargoes.

The tanker Parsifal II arrived from New Orleans for Imperial Oil this morning.  This is not the ship's first visit here. Its last call was Just a year ago, April 28, 2018. 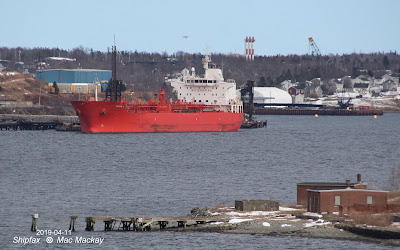 The ship as it appeared today from over George's Island.
On that trip however it was carrying the name Conti Agulhas. The name change took place when the ship changed ownership between two obsurely named companies on May 1, 2018. Previous owners Conti 145 Conti Agulhas became Condor 220 Schiffahrts. Management remained with NSB Niderelbe Schiffahrtsges however, so aside from the name change there is no other difference in the appearance of the ship. 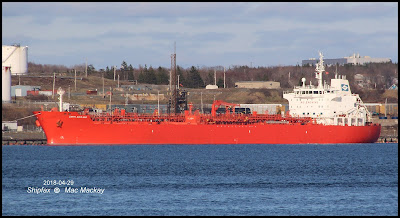 The ship as it appeared a year ago from a position I cannot access today.

BBC California sailed this evening from Pier 9C giving its destination as Ogdensburg, NY. While in Halifax the ship transferred six wind turbine blades to fleet mate BBC Brazil. The latter ship is due to sail tomorrow. 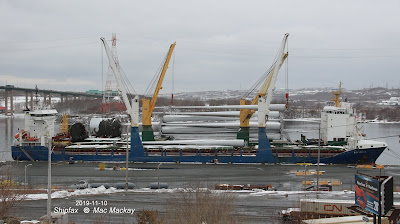 Yesterday in the midst of moving one blade the longhoremen took their lunch break with the load suspended in mid air. A thick coating of fresh snow was melting away all the while. 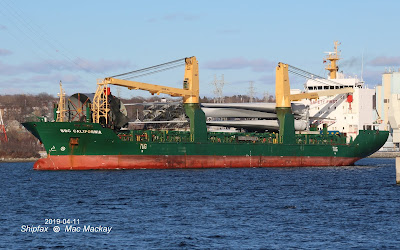 On departure today, there was insufficient room for the ship to turn round at its berth in the Narrows, so it headed north into Bedford Basin then turned outbound and headed for sea.

The ship still had a good many blades on deck, along with a couple of tower sections. No one seemed concerned that the tarps on those sections had gone adrift on the way to Halifax, It may have other components below deck, but it is lightly laden.

The pilot boat Scotia Pilot paces the ship outbound. The boat had been out of service since January, but now appears to be fully operational again.