Last night's heavy wet snow was clinging to surfaces today as ships went about their business.

USCG Campbell sailed too early for me to catch (I had to shovel myself out first) but I did see USS Jason Dunham leaving for sea. 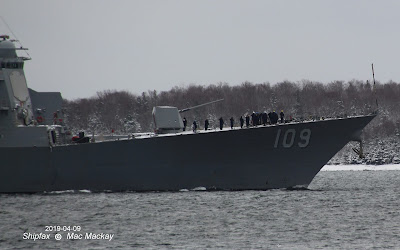 There appeared to be lots of snow left on deck - perhaps they don't carry shovels as standard equipment. 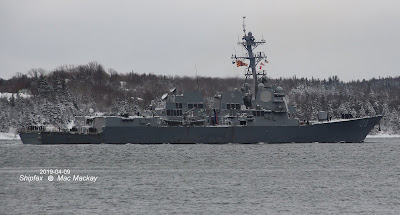 I hope that crew on the forepeak know how to bring the anchor home. It wouldn't do to have it unsecured once out at sea.

The Canadian bulker Ferbec sailed this morning for Havre-St-Pierre. It arrived March 13 for reflagging back to Canadian at the end of a winter season sailing under the Barbados flag. 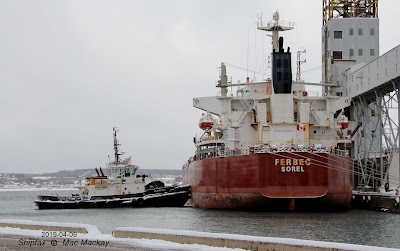 Winter doesn't appear to be quite over yet with lots of snow sticking to the tug Atlantic Bear.

Mining has resumed for the season at the RioTinto Alcan mine at Lac Tio, north of Havre St-Pierre. Ferbec operates a constant shuttle from Havre-St-Pierre to the smelter in Sorel-Tracy on a dedicated service each year until late fall.

There was another snowy scene at the Seaview Park boat launch just north of the MacKay bridge. 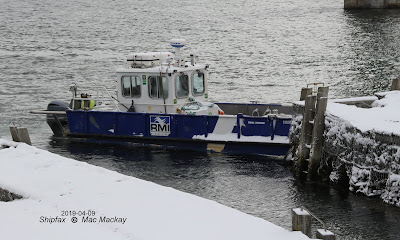 RMI Marine's "Tidal Runner" [officially C16286NB] an aluminum hulled workboat / landing craft was standing by at the end of the slip, with no evidence of anyone aboard. It was later noted to be doing "unmanned vessel trials" in Bedford Basin.
I am assuming that this did not mean that it was being navigated by women*. Instead I believe it was being operated remotely from some other location. Since the maneuvers took place near the Defence Research and Development barge, perhaps it was doing the trials for that government agency.

Update:
An "Unmanned" craft identified as C Cat 3 110 with British flag has been tracked by AIS in Bedford Basin. For further details see: https://www.asvglobal.com/product/c-cat-3/

----
*Some of the Halifax ferries, at least one Dockyard tug {altough not currentlyt} , one ATL civilian tug and one tour boat in season, are regularly in command of women, with several female crew members on particularly navy and Coast Guard, but civilian also.
Rather than using the term "unmanned" I prefer to use autonomous, which seems to be the term favoured by industry. There have been numerous demonstrations of this technology - most recently a boat in Boston went through a variety of movements and used its firefighting equipment while controlled from New Orleans, 1500 miles away .
In 2018 the first remotely controlled long distance tow saw the tug Giano towing a 10,000 dwt loaded barge from Palermo, Sicily to Genoa. Remote controllers in Naples operated the tug for 264 nautical miles of the 430 nautical mile trip.