It was the inaugural call for Holland America's Zaandam today as the 61,396 gt ship tied up at pier 31.
The regular cruise terminal facilities at pier 22 are not ready for the tourist season yet, so the ship berthed at the open (and highly industrial) pier 31. 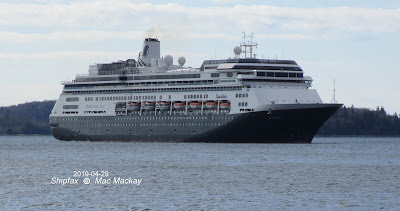 Zaandam makes the turn in for pier 31.

Built in 2000 by Fincantieri, Venice and refurbished most recently in 2015, the 1430 passenger ship will become a familiar sight in Halifax this year with  no less than 23 scheduled port calls. The ship replaces the veteran Maasdam (1255 passengers) that has been reassigned to the Alaska/Pacific area.

It is regrettable that ships have to tie up at pier 31, and then have to be bussed off the Port property through other port related activity. However there may be more ships docking there this year as the only two berths for large ships may be occupied by other cruise ships. If ships want to take bunkers, they may have to tie up at pier 31, because tanker trucks can't access the Pier 20-22 seawall and there is no bunkering barge service in Halifax anymore.
The Port's master plan will eliminate pier 31, so there will not be enough berth space at the deep water piers for all the cruise ships that usually call here. - definitely a problem awaiting a solution.

The Canadian owned tanker Kitikmeot W arrived early this evening and tied up at pier 27. The ship was last here, at the same pier, December 30, 2018 to January 2, 2019 and sailed under Marshal Islands flag for foreign going winter work. It returned to Canadian waters last week when it sailed up through the Seaway to Hamilton, ON, arriving there April 22. After unloading, it headed for Halifax in ballast. It will likely be re-flagged Canadian here in the next few days. 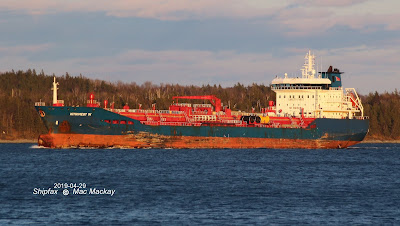 Kitikmeot W exhibits a case of "lock rash" from its recent trip through the St.Lawrence Seaway.
Ships slide along the approach walls to the locks on their "knuckle" and incur serious scraping.

Coastal Shipping Ltd of Happy Valley-Goose Bay, NL, part of the Woodward Group, are owners of the ship. Built in 2010 by Icdas, Biga, Turkey, the 13,097 gt, 19,938 dwt ship sailed as Icdas-09 until last year. It arrived in Halifax May 8, 2018 for AGM inspection, but was still under Marshal Islands flag. It then made a trip to Oshawa, ON to deliver cargo then was first registered in Canada June 5, 2018.

A tanker that was last here in 2012 arrived yesterday for Imperial Oil. At first it tied up at Number 3 dock, then today after  NS Pride sailed, moved to Number 4 dock.
Ance sails for the Latvian Shipping Co of Riga, but is registered in the Marshal Islands. 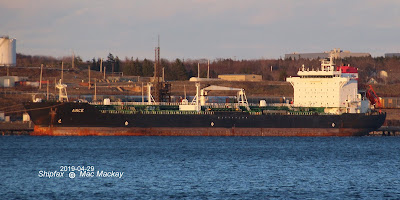