I've never been one to adhere to the old adage about all good things coming to those who wait. However I did wait it out today in hopes of getting a sunny photo of a first time caller, Grande Senegal Although the pilot was called for 1630 and the tug Atlantic Bear was alongside, the ship was not ready to call for clearance until 1740 and then did not get away from Cerescorp, Fairview Cove until 1915. There were some sunny breaks in the interval, but it was down to glimmers when the ship actually hove into view. 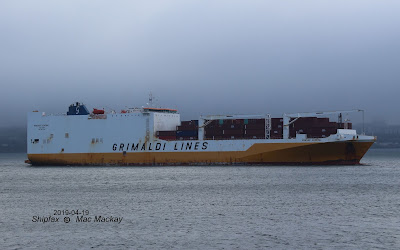 Owned by Grimaldi Lines, parent company of Atlantic Container Lines, the ConRo is here as a substitute for ACL's Atlantic Sail which had to go into drydock in Hamburg April 10. It is still there. 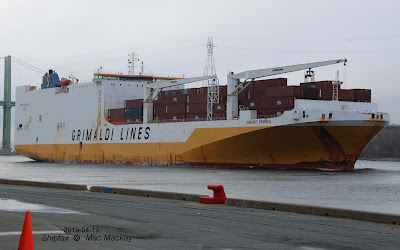 Fortunately Grimaldi was able to find another ship in its stable to take over for at least one round trip. Grande Senegal was built in 2010 by Uljanik Shipyard in Pula, Croatia and is one of fifteen similar ships in the Grimaldi fleet, and two of its class, at 47,218 gt, 26,653 dwt with a capacity of 800 TEU and 2500 CEU.  While nowhere near the giant size of the ACL G5s, it certainly takes some of the weight off the line which relies on five ships to meet a weekly transatlantic schedule. This ship's next port is given as Baltimore, so apparently ACL is skipping New York entirely on this voyage.

Another Grimaldi ConRo, Grande America has been in European news for several weeks after it caught fire and sank in the Bay of Biscay March 12. A large oil slick resulted, but seepage has now been halted by sending down an ROV to seal vents. The wreck is intact and upright on the sea bottom, 15,000 ft down. It carried 365 containers, of which 70 carried hazardous cargo, and 2,000 cars, many of which were luxury models.
Porsche went to the extent of re-activating a closed production line to replace four 911 GT2 RS models that were included in those lost. Thier Brazialian owners will be overjoyed I am sure.

I did get one photo when the sun peeked out, as Atlantic Condor moved from pier 9B to Bedford Basin for a short trial period. 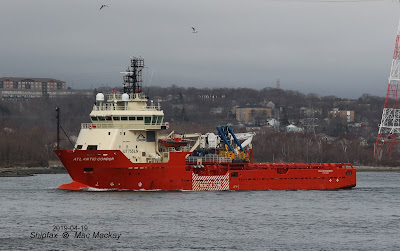 The supplier is one of two Atlantic Towing vessels servicing the Deep Panuke gas installation off Nova Scotia. Both Atlantic Condor and the smaller Atlantic Tern have been drydocked this spring in St.John's forcing the partner vessel to spend almost three weeks at sea, since one vessels stands by the facility at all times, while the other shuttles back and forth with supplies.

The Encana owned Deep Panuke gas field ceased production last year and is in the decommissioning stage, which will last until 2021 when all four production wells and one injection well are capped, and production trees and topsides structures are removed.
For whatever reason government regulators allowed the pipeline to shore to be abandons in place. It is to be purged and opened and filled with seawater.