Never one to focus entirely on the more popular waterfront activities (such as cruise ships) I usually pay more attention to the mundane, because they often carry interesting stories.

Today's departure was one of those, Augusta Unity one of Nirint's ships running from Cuba with nickel sulfides for processing in Canada. After unloading here, the ship carries on the Europe then circles back to Cuba with general cargo and containers. 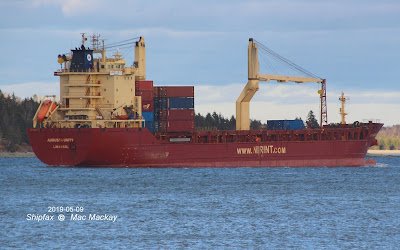 Since 2015 it was renamed Onego Pioneer then in 2016 Atlantic Pioneer and in 2017 Augusta Unity. It seems to have had the same owners throughout, Aspire Navigation Co Ltd of Cyprus, so the name changes were made to suit the various charterers.